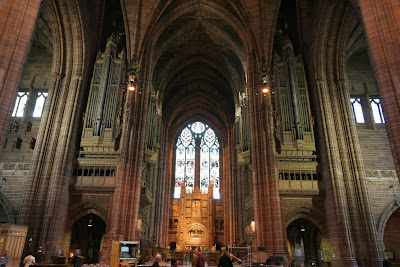 
The Organ in the Anglican Cathedral, Liverpool

Most of the organ sits in two cases on opposite sides of the choir. 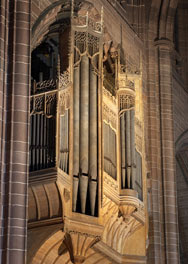 There are eight manual divisions: the Great, Solo, and Bombarde organs occupy the South case; the Swell, Choir, and Positif occupy the North case; the Corona organ is installed in a special gallery high up under the tower; the Central organ, to support large congregations, is in a gallery above the Rankin porch. The Pedal organ is distributed between both North and South cases in the choir.

Other milestones in the history of the instrument:

* 1958-60: complete overhaul and modernisation including major changes to the Choir organ, and the installation of humidifiers.

* 1965: a donation from Lady Harvey provided a two-manual mobile console to be used in the choir for accompanying small services.

* 1977: general overhaul by Harrison and Harrison.

* 2007: a donation from the McKinley family in memory of Eleanor Wright provided the Central Space organ.

The cathedral has its own homepage.
http://www.npor.org.uk/cgi-bin/Rsearch.cgi?Fn=Rsearch&rec_index=E00301#PhotoSection

With 44 couplers the total number of registers comes to 196. 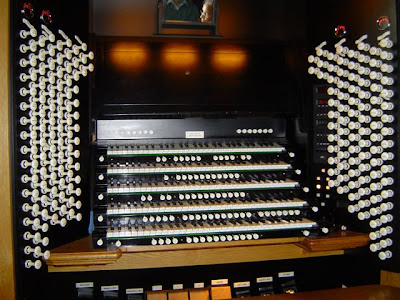 Corona on Bombarde
Corona on Choir

Couplers
There are Octave, Sub-Octave and Unison-Off couplers on the Bombarde, Solo, Swell and Choir organs. The Corona and Central organs have Octave and Sub-Octave couplers.

Solo to Swell
Great to Bombarde 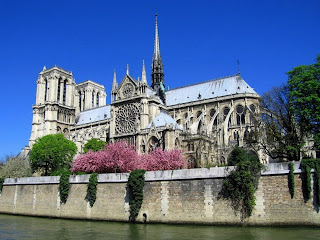 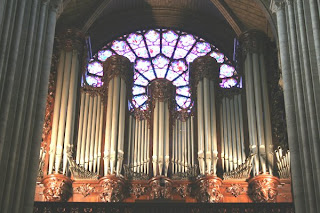 The history of organs in Notre-Dame began around 1330. The first instrument was located in a bird's nest located under a high window in the nave.

By 1400, it was decided to install a second instrument on a high and narrow stone gallery above the western portal while the old organ will still be used. This new organ was completed on October 25, 1403. A major restoration began in 1473 and would last 50 years. Many modifications to the instrument were carried out including the restoration of a large number of pipes. In 1609, in order to add a second manual keyboard, the pedalboard and its action were removed.

The instrument has three normal tonal structures and about 2000 pipes: a plenum, a flue chorus and a battery of reeds. A third manual keyboard is added in 1620 and a fourth one, in 1672. From this instrument, only twelve pipes are extant.

When, in 1730, it was finally decided to order a new organ, France was entering into the "Age of Enlightenment" and medieval woodworking was to disappear. The contract is awarded to François Thierry. The instrument was completely redesigned: the new keyboards have 50 notes, C1 to d5, and to the four classic manuals, a new one is added as third manual: Bombarde. The Grand-Orgue has a 32' Montre and a Plein Jeu on 4 octaves. The battery of reeds now includes a Bombarde and a second Trompette. Récit and Écho manuals are as usual. The pedal division is enlarged. The new large main organ case, in a Louis XV style not yet completely free of the rigidity of the "Great Age", is installed higher and partly hides the west rose window. This organ will be used for the next fifty years.

In 1783, François-Henri Clicquot intervenes. To make room in the Positif division, a new Louis XVI style organ case is built by Caillou. All the stops of this division are rebuilt except for the 8' Bourdon and the Cornet. A 16' Bourdon is added and a 8' Flute replaces the 4' Flute. In the Grand-Orgue division, almost all tin pipes are replaced without any tonal change. In order to have an 8' Flute, it was considered to uncap the Bourdon. New reeds replace the old ones. A Trompette is added in the Bombarde division. The Écho division is rebuilt according to Clicquot's principles: Flute, Bourdon, Trompette and Clairon. The pedal division is again enlarged. The organ case is enlarged up to the exterior walls with Louis XVI panels topped by large wooden palm trees.

During the Revolution, the organ was used for many festivities but, even it was threatened by revolutionnary decrees, the instrument only suffered from years of neglect as was the fate of many French organs during that period. Only monarchy-reminding ornamental elements and fleurs de lys located on the basement portion of the organ case were cut out.

In 1828, the general condition of the organ was not good at all. Soon after began the restoration work on the building itself by Lassus and Violet-le-Duc. Dust accumulated in the pipework, fatigue appeared in the difficult winding system, while rain and wind were coming in from the stained-glass windows being restored. These conditions lead to an intervention from Louis-Paul Dallery, the last Dallery organbuilder, who proposed a tune-up with simple modifications to the winding system.

As the architectural restoration works used up all the available credits, Viollet-le-Duc ordered an instrument worthy of a cathedral but without luxuries and worthless research. All existing material should be reused as much as possible. The project, presented in 1862, called for "a first-class instrument (four manuals and pedal) large enough for the church".

Restoration work on the organ began in June 1864 under the supervision of Aristide Cavaillé-Coll. Two situations were deplorable: first, the Positif case had been removed by Viollet-le-Duc and second, the gallery would not be lowered. The large main organ case is brought forward in order to gain depth and to layout windchests on separate floors. All voices should produce a tutti where every sound can blend with each other, be powerful and fill the large church.

From these requirements, progressive mixtures and mutations up to VII were added throughout the manuals and introduced in order to ensure a close bond between the foundations stops and the reed stops and, at the same time, to add brightness. By choosing the use of separate wind and different pressures between tonal divisions and between the bass and treble in the same division, an ascending harmony was possible. In order to alleviate the mechanical action, he installed, like he had done at St. Sulpice, pneumatic lever machines developed by British organ builder Barker in 1839.

The Notre-Dame organ was first heard, on Christmas Day 1867, as part of the World Fair without being in the competition. The instrument was officially received, in February 1868, by an international commission.


In 1904, a restoration was carried out by Charles Mutin. Appointed in 1900, titular organist Louis Vierne asked for the Clarinette and the Dulciane from the Récit be replaced with an 8' Diapason, a 4' Octave and, a Fourniture IV. The harmonic lower notes from the Bombarde and Trompette in the Récit division were replaced with full-length pipes. It was the first neo-classical change.

In 1924, electric blowers are installed.

In 1932, Joseph Beuchet carried out a second restoration with modifications to the stop list: in the Pedal division, a 16' Violoncelle and a 8' Bourdon are added; in the Grand-Choeur division, an 8' Flute is added; in the Récit division, a Cymbel replaces the Nasard which is transferred to the Positif division replacing the Piccolo.

Under the supervision of Pierre Cochereau, in 1963, the following modifications were carried out by Jean Hermann and Robert Boisseau: the Pedal division now has 30 stops with the addition of an 11-stop Small Pedal division; creation of a 32' Plenum in the classical tradition leading to a new layout of the Plein Jeu on the five manuals; creation of a more powerful and more classic Reeds Grand Choeur; creation of a small 2-stop classic Récit; removal of the Barker machines, new console, new electric action, electronic combinations. 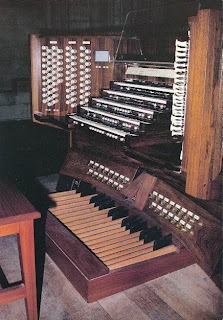 In 1989, the Ministry of Culture decided to launch a complete restoration of the instrument including the modernization of the action. The contract was awarded, in 1990, to Jean-Loup Boisseau and his associate, Bertrand Cattiaux.

The restoration brought together two worlds which were, until then, complete strangers to one another: organ building (organ building firms Boisseau, Emeriau, Giroud) and computing (Synaptel). On one side, high-level workmanship in a country where the organ building heritage is very rich and where historic organ restoration policies, carried out by the State and the municipalities, allowed the training of internationally renowned organ builders. On the other side, the world of engineers, computer system integrators in aeronautics, astronautics or telecommunications industries.

Close to 900 wooden pipes were brush-cleaned, compressor-cleaned, repainted and restained; 7000 others were ultrasound-cleaned in a water bath; the Principals in the Grand-Orgue and Positif divisions received new tuning slots; 8' and 4' chamades were added in the Grand-Orgue division. Other accessories were also added.

The console and the transmissions were refurbished by Synaptel and everything is now under the digital control of seven computers. With this unique system, the organist can memorize, work and restore his performances. He can set the touch depth of manuals to correspond to the valve opening timing. He has access to a combination editing and generating software that will let him create, modify, memorize, on disks, a multitude of combinations. With the MIDI gateway, he can hear himself, after he has completed a performance, in order to evaluate his performance or his registration.


1402
an old organ is moved to the present location and inserted into a gothic organ-case
1730
the organ'case is replaced by the present LOUIS XVI one the organ is enhanced to 5 manuals and 46 stops many pipes kept from earlier centuries of which 12 in use today have been salvaged from previous centuries
1830
back to 4 manuals including an "expression" manual
1864 - 1867
enhanced and rebuilt by Cavaille-Coll 5 manuals and 86 stops among other players: Saint-Saens and Cesar Franck  pneumatic assistance: 'Barker lever'
1900 - 1937
Louis Vierne was the organist 1932: partly electric/partly pneumatic action installed
1959
fully electrified: manuals and relays (excluding the Barker lever) but this old architecture was consisted of ... 700 kilometers of cables (yes, you are reading correctly !) problems of oxydation and ... unpredictable breakdowns
April 1990 - December 1992 (closeup)
computers and local area networks controlled

Since 1985, the titular organists are Olivier Latry, Philippe Lefebvre, and Jean-Pierre Leguay.


YOU CAN LISTEN TO ANY (OR ALL) OF THE FOLLOWING RECORDINGS OF THE NOTRE DAME PARIS ORGAN BY CLICKING ON THE LINK BELOW:
TO RETURN TO THIS PAGE AFTER LISTENING, CLICK "BACK" ON YOUR BROWSER. 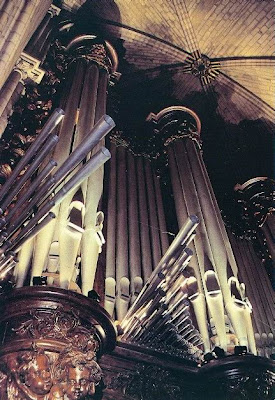