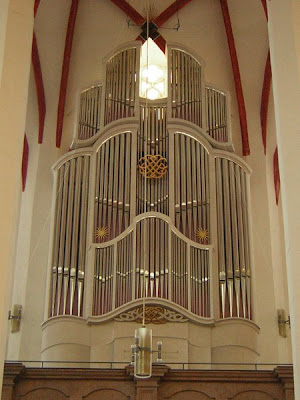 A notable feature of the Thomaskirche is that it contains two organs. The older one is a Romantic organ by Wilhelm Sauer, built 1885-1889. Since this organ was not suitable for Bach's music, a second organ was built by Gerald Woehl's organ building company from 1999-2000. This "Bach organ" was designed to look similar to the old organ on which Bach had played in the Paulinerkirche.

The St. Thomas Church is one of 2 houses of worship in Leipzig’s city center. Home of the St. Thomas Boys Choir and a place of musical creativity; it is also the final resting place of the famous St. Thomas Cantor, Johann Sebastian Bach.

The St. Thomas Church is one of the earliest places in Europe, which documented organ music during church services. "Organ songs" were mentioned for a Maria Mass in 1384 and in 1392 for the Corpus Christi Mass-indications of a very early fostering of music from the St. Thomas founders of 1212. The organs of Bach's time do not exist anymore. The organ, which can be seen on the west choir loft, was built by Wilhelm Sauer in 1889. Originally, this Romantic period instrument had 63 organ stops. In 1908, more stops were added to give a total of 88 stops. It was later restored and brought back to its original eminence in 2005.

The new Bach-Organ on the north choir loft, situated across from the Bach-Window, was built in the year 2000. This organ is used especially for playing the organ works of Johann Sebastian Bach and was built by the organ manufacturer Gerald Woehl in Marburg. The sound quality of this instrument, with its 61 organ stops on 4 manuals and a pedal board, is similar to the organs built in Middle-Germany during the 18th century. The organ in the University Church St. Pauli, which Bach played during his time in Leipzig, served as the inspiration for the form of the Bach-Organ.

The St. Thomas Church dates back to the 12th Century. It was here in 1409 that the University of Leipzig was founded. From 1492 to 1496, the church had the form of a late Gothic hall church. It was also here in 1539 that Martin Luther preached the implementation of the Reformation. For the last 800 years, the St. Thomas Boys Choir has been singing here.


One of the oldest boy choirs in Germany singing Matthäuspassion (St Matthew Passion) by their own cantor from XVII Century - J.S. Bach. However now the choir is led by inimitable Georg-Christoph Biller. This is a very short sequence of originally 3+ hours long musical masterpiece.

The St. Thomas Boys Choir, whose history dates back to the year 1212, is the oldest cultural establishment of the city of Leipzig. Outliving all political, municipal, religious, and educational controversy, 800 years musica sacra has shaped the choir's past.

Through the influence of the many St. Thomas Cantors, including the most famous-Johann Sebastian Bach (Thomas Cantor 1723-1750)-the city of Leipzig and the St. Thomas Church became the center of Protestant church music.


The St. Thomas Church is home to the Boys Choir. A choir rich in tradition, they are committed to continue his musical legacy.

Today, visitors from all over the world come to Leipzig to observe church services in the St. Thomas Church, hear a motet from the St. Thomas Boys Choir, or to take pleasure in concerts and organ music. 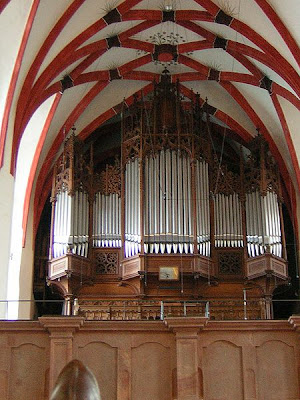 Even amongst the many churches of Europe, St. Thomas in Leipzig, Germany is special; not only has it housed a world famous boys choir but has been the site of considerable music creativity. Composers such as Mendelssohn and Mozart have performed there and Wagner was baptized there, but certainly the greatest works ever done there are the compositions of J.S. Bach.

on  the new "Bach Organ" built by Gerald Woehl 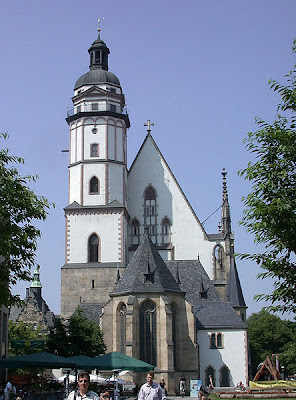 The organ featured in this recital by Mr. Böhme is the new "Bach Organ" built by Gerald Woehl dedicated in 2000 according to the official St Thomas Church. 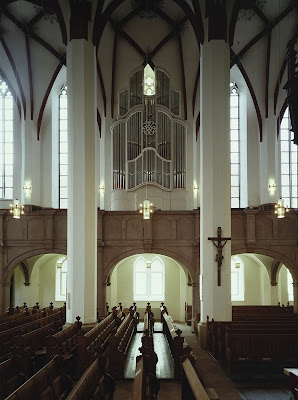 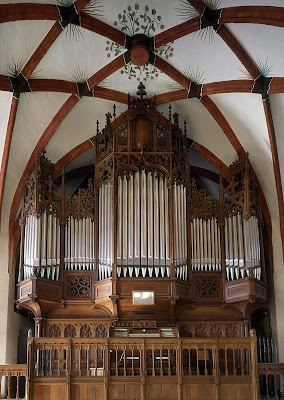 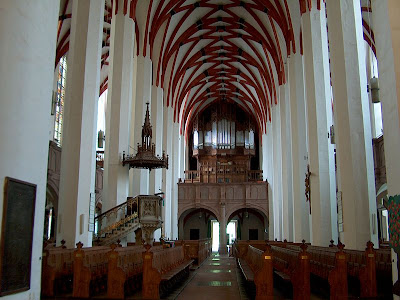