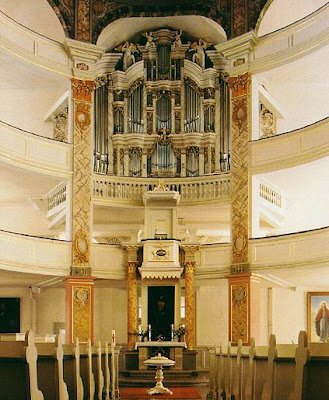 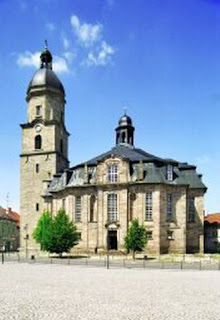 After building a big, splendid baroque-styled round church, it was natural to complete it with an adequate organ, and Heinrich Gottfried Trost (1681-1759) received the contract, although the city fathers initially favoured another master. The Court Architect of the Duchy, Johann Eberhardt Strasburger, was brought to Waltershausen to define the architectural shape of the organ case. The well known organ expert of the time, Jacob Aldung, wrote about this organ: « The town has obtained the materials. The work is very beautiful… ».

On another page is written that Trost, after spending 20 years making the organ in Waltershausen, probably left it unfinished and left the city fathers annoyed as well. Various reasons for this can be suggested: poor scheduling of his workshop operations, financial problems, etc. On the other hand, the maintenance and care work required by the Duke in connection with his privilege as court organ maker, which Trost had to give priority to, hindered the punctual completion of new works. Thus he became hopelessly indebted. The disputes in Waltershausen during the building process peaked to such a level that one of his tradesmen exaggeratedly said: « Trost is cheating the city fathers. One should place him under arrest and hang him on the gallows ».

Trost’s first design for the organ in Waltershausen is dated February 8, 1722. The dedication of the completed organ is not precisely documented; it was probably in May 1741. Furthermore, it is not clear whether Trost or another organ maker completed the work. The presence of Trost in Waltershausen is documented for the last time in the year 1730 although it is unthinkable that the organ was finished by this date. These historical facts seem very strange when one considers what a significant organ project is involved. In the case of similarly placed organ, such as Zacharias Hildebrandt’s organ in the St. Wenzelskirche in Namburg (also a city organ project), there was a crowning completion ceremony with famous examiners (such as Bach and Silbermann) and an opulent feast of organ music. No report of anything of this kind has been handed down to us about Waltershausen.

Why is this organ in Waltershausen nevertheless famous? Regarding this we should cite first of all Trost’s outstanding concept. Although the organ was made in the first third of the 18th century, it nevertheless has all the traits and delicateness of the gallant style. Trost enriched the organ making of his time enormously with new instrumental features which are also to be found in this organ. Furthermore, it has all of the features that marked organ building in Thuringia at this time: emphasis of the fundamental tonality and at the same time of solemnity, a great supply of labial eight foot voices in the manuals, transmission stops from the great organ to the pedals, mixtures with thirds, unusual stop designs such as Unda maris and Doppelflöte. It also has, however, typical long-established voices such as one expects to find in Thuringia: Violonbass, Viola di gamba, Flaute douce, Sesquialter, Cymbelstern. Naturally the sonorous lingual voices are there too, as Adling especially emphasised: « The work is very beautiful, especially the reeds pipes. » In general, Trost placed high value on the interior and exterior beauty of his organs as an expression of the aesthetics of the Age of Enlightenment. 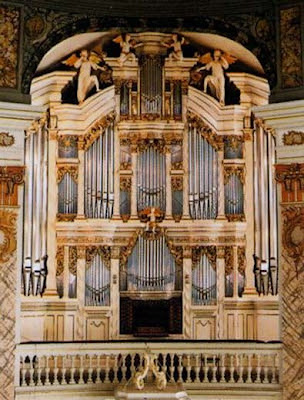 This can be experienced in Waltershausen if one not only looks at the magnificent organ case, of which the beauty is unfortunately obscured by columns in front of it, but also by discovering the interior of the organ. There one finds, for example, turned supports of the framework or the wonderfully shaped wooden pipes.

Organ music and organ playing were determining elements of the Lutheran liturgically influenced church services in Thuringia. The organ did not just have a high place high up above the pulpit and altar as an embodiment of heavenly music. It was also an active partner in the verbal profession of faith. Aside from its soloistic and choir accompanying functions, it played an important role in florid music and ensemble music with other instruments. This practice received special attention in Thuringia, even in the smallest towns. The Trost organ is especially suitable for the performance of music in the gallant style because of its beautiful flute stops and the enormous variability of the individual voices. Furthermore, this type of Trost organ was definitely highly regarded by Johann Sebastian Bach.

1722 Contract with Trost for a two manual organ
1723 Contract for a three manual organ and start of construction
1735 Departure of Trost from Waltershausen; the organ remains unfinished
1755 Completion of the organ by an unknown organ maker
1835 Repair by Knauff from Grosstabarz
1850 Gilding of the organ carvings donated by Johann Daniel Kestner
1853-55 Modification by Johann Michael Hesse from Dachwig
1896 New bellows by Hugo Böhm from Gotha
1958-59 Modification by Hermann-Eule Orgelbau from Bautzen
1994-98 Restoration by Orgelbau Waltershausen GmbH 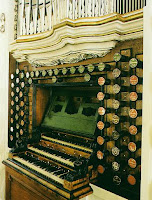 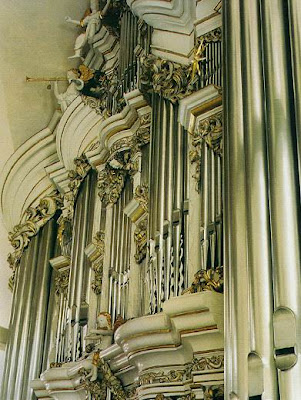 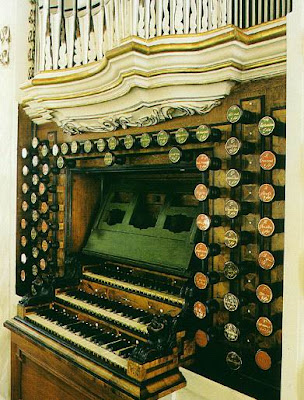