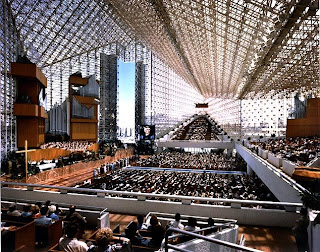 The Cathedral pipe organ, made possible by a gift from the late Hazel Wright of Chicago, is the third largest church pipe organ in the world. Conceived by famed organ virtuoso Virgil Fox, the organ unites the Aeolian-Skinner organ from Avery Fisher Hall of Lincoln Center in New York City with the Ruffatti organ built for the former sanctuary in 1977.

There have been numerous additions and refinements by noted organ builders. There are 287 ranks of pipes and over 16,000 individual pipes, all playable from two five-manual consoles. White oak cases hold the nearly 11,000 pipes in the chancel area. Included there is a rank of forty-four 32-foot pedal pipes, originally in the organ at Bovard Auditorium at the University of Southern California-a gift of the Mt. Olive Lutheran Church of La Crescenta. The South Balcony divisions of the organ contain 5,000 pipes, and in the East and West Balconies are 549 horizontal trumpet pipes-the largest collection of such pipes in the world. 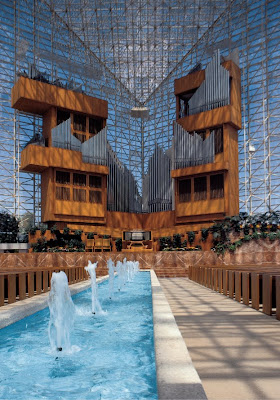 The church's 273 rank, five manual pipe organ is one of the largest in the world.[7] Constructed by Fratelli Ruffatti and based on specifications by Virgil Fox and expanded by Frederick Swann, the instrument incorporates the large Aeolian-Skinner pipe organ built in 1962 for New York's Avery Fisher Hall, and the Ruffatti organ which had been installed in the church's previous sanctuary. Swann was organist at the Crystal Cathedral between 1982–1998. 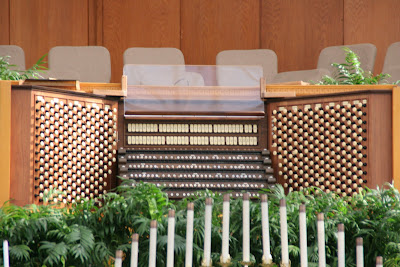 Ray Ash - Great Is Thy Faithfulness Played on the Hazel Wright Organ at the Crystal Cathedral, Garden Grove, CA 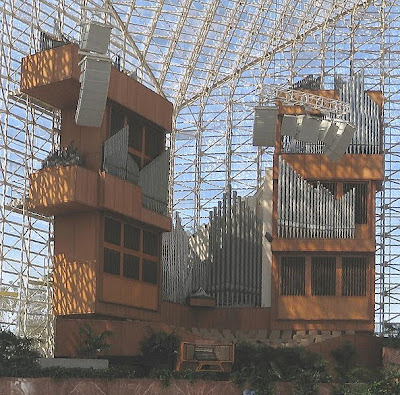