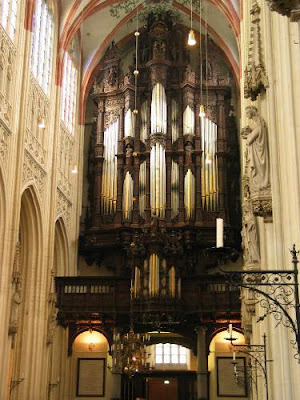 The great organ
HISTORY
The archives of the "Illustre Lieve Vrouwe Broederschap" (Illustrious Lady Brotherhood) show that already in the 14th century there is mention of an organ in the Cathedral of St. John 's-Hertogenbosch.
It is known that in 1533 Henry Niehoff built an organ that was destroyed by the tower fire in 1584. During the Twelve Years' Truce the current major organ was built at the west wall. It is one of the jewels of St. John's Cathedral.

The case, made in the years 1617-1620, is considered one of the most impressive in the world. The monumental architectural design is of an unparalleled majestic beauty. Exceptionally rich are the sculptures and carvings. The whole arsenal of the Dutch renaissance ornamentation designs are displayed there. Artists Frans Simonsz, carpenter, and sculptor Georg Schysler have made this artwork. 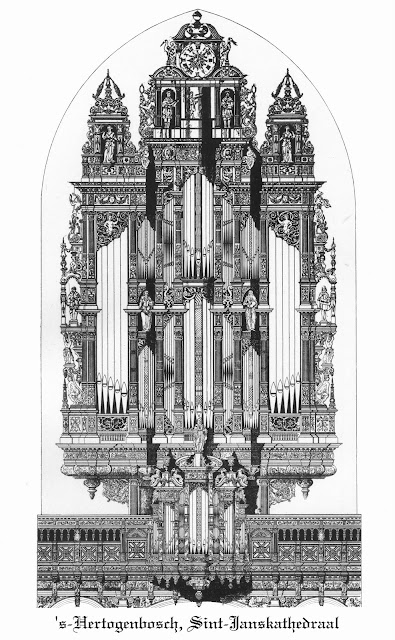 The sonorous part of the instrument has a turbulent history.
Florentius Hoque from Grave was the first builder. His work was not found adequate and was twelve years later enhanced by father and son Hagerbeer (1634) and was praised by the judges who said: "our organ excels all organs in the Netherlands".

In the beginning of the l8th century the organ was restored and enriched with some stops by Cornelis Hoornbeeck and Christian Müller. In the seventies the instrument became disfunctional. The young German builder from Nijmegen, A G F Heyneman, built a new instrument in the years 1784-1787 in the style of early-and late-rococo classicism, using the old pipes.
In 1902 a total conversion took place to the taste of that time by the brothers Franssen. The mechanical system was replaced by pneumatics, the Swell was emptied and many stops were added. The instrument had 72 stops and was the largest in the Netherlands. It received slider chests and electro pneumatic action.  The result was unsatisfactory.

Since 1961 the church has been under restoration and when the pulpit, the choir stalls and altar were restored, it was also decided to restore the organ to  the state of 1787. There was sufficient historical knowledge about the instrument and many ranks of old pipes and were still present.

A  new mechanical Tracker action was built, the pipes were extended to the old historical pitch, and missing pipes were created in the old style and some new stops were added.

When the Flentrop firm completed this work in 1984 the instrument, although significantly smaller than after 1953, has become far more eloquent and restored to its former glory. Between September 2003  and  January 2004, all pipes were stripped of oxidation, grime and dirt. The scaffolding, required to tune the front pipes, has been used to also clean and wax the entire organ case.

Bach Praeludium 548, Koopman, St. Jan Cathedral organ in Hertogenbosch with most of the pipes and case dating back from 1550 till 1650.


Bach Fuga 548, Koopman, St. Jan Cathedral organ in Hertogenbosch with most of the pipes and case dating back from 1550 till 1650. 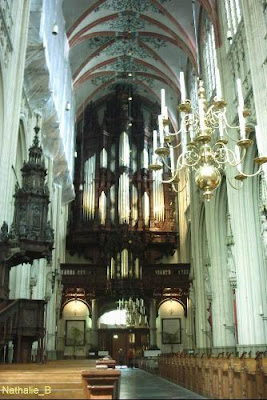 
Bach 547, Koopman, St. Jan Cathedral organ in Hertogenbosch with most of the pipes and case dating back from 1550 till 1650.


Bach BWV 533, Koopman, St. Jan Cathedral organ in Hertogenbosch with most of the pipes and case dating back from 1550 till 1650.

The organ is the product of various builders from 1550 till about 1760. It contains some of the most strange and unique pipes ever heard from the early Renaissance. All the pipes and stops are original from 1550 till 1760. The case is obviously original, all in﻿ dark wood with incredible sculptures and details more in the Gothic style than the Barque one.

The organbuilder is Hendrik Niehoff, the famous Organbuilder from Brabant who completed the organ in the St. Jans Cathedral in 's-Hertogenbosch in 1543.

Since the 1530s Hendrik Niehoff lived in 's-Hertogenbosch and worked at the following:
source: http://nl.wikipedia.org/wiki/Hendrik_Niehoff#Hendrik_Niehoff


In 1543 on the South-West wall opposite the in 1525 erected chappel a for that time large organ was built. This instrument is still the basis for the present organ.

The main project of the current organ was built by Heyeman between﻿ 1617 and 1621 using older pipes, since then many others repaired and modified it. Among the mysterious co-re-builders are probably Mueller and maybe also Garrels, F.C. Schnitger and maybe even Hinsz. But the pipes come from much older era and it﻿ has a very ancient sound.

Organ rebuild by Flentrop (1984) it was brought back to its original Baroque condition. 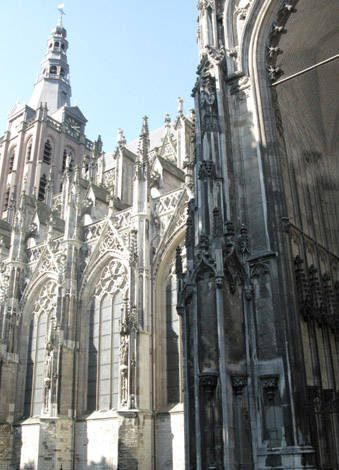 A Romanesque church used to stand on the spot where the St. John now resides. Its construction is thought to have started in 1220 and was finished in 1340. Around 1340, building began to extend the church, from which its current gothic style came. The transept and choir were finished in 1450. In 1505, the romanesque church was largely demolished, leaving only its tower. Construction of the gothic St. John was finished about the year 1525.