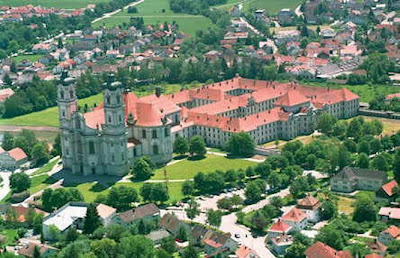 The Holy Trinity Organ in the abbey church of Ottobeuren, near Memmingen, SW of Munich, was built by Karl Joseph RIEPP in 1766. The master work of French organbuilder Karl Joseph Riepp (1710-1775) in the Basilica of Ottobeuren — actually a double organ — is one of the most treasured historic organs in Europe. It was not until 1957 that a third organ was added by G. F. Steinmeyer & Co, which has recently been renovated and augmented by Johannes Klais, making 100 stops available on 5 manuals. 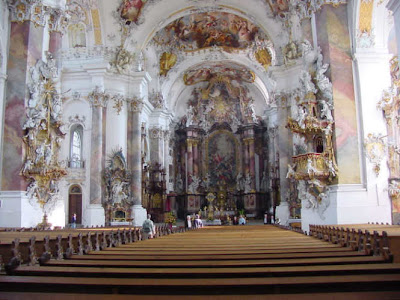 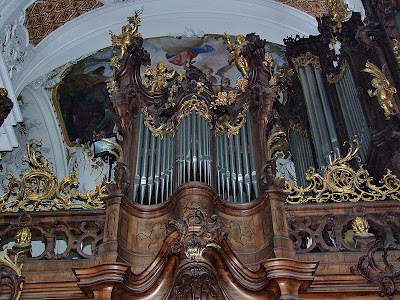 The church has 3 organs: two are located in the chancel, and the third one, in the rear gallery of the church.

The 1000th anniversary of the creation of the abbey should have been celebrated in 1764. In the new church, whose construction began in 1737, stalls were installed in the chancel in 1755. For these two organs, facing each other, on each side of the chancel, the organcase is the extension of the stalls and was designed by cabinetmaker Martin Hoermann, from Villingen, and sculptor Joseph Christian, from Riedlingen.

There were only ten years left for the installation of the organs, originally three of them, to be built by Karl Joseph Riepp:

The Holy Spirit organ should have been completed by 1762 because Riepp wrote about it, to Jean André Silbermann, in a letter dated March 10, 1763. Stalls and decoration of the church will be completed only in 1764 and the large organ just before the commemoration jubilee, on September 26, 1766.

After Riepp's death in 1775, John Holzay is responsible for the maintenance of the organ until 1809. In 1787, he executed an important renovation that included a first raising of the diapason. In fact, being of French aesthetics, the diapason of these organs was more than a tone under the diapason usually found in central Germany's organs. 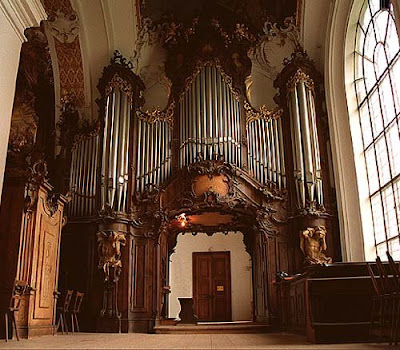 Holy Trinity organ was renovated by Joseph Bohl, from Augsburg, in 1862. At that time, the instrument has 68 stops and has a 25-note pedalboard à la française" that he replaces for a German pedalboard. He also built an horizontal bellows to replace the old cuneiform bellows and again raised the organ's diapason.


For these instruments, Riepp chose very narrow scales due to the very generous acoustics in the church but pipework has been shortened by more than a tone. Unfortunately, Riepp's organs do not sound as Riepp voiced them. 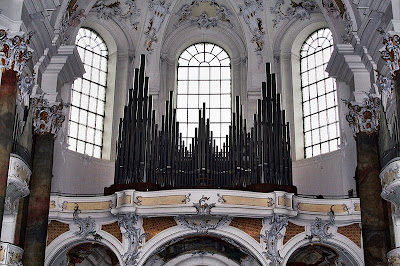 In 1952 when funds became available due to the cultural support of the German Industry Association, organbuilder Steinmeyer built, from plans prepared by Riepp and Dom Bedos, a new organ, called "Marienorgel" (Mary's Organ). 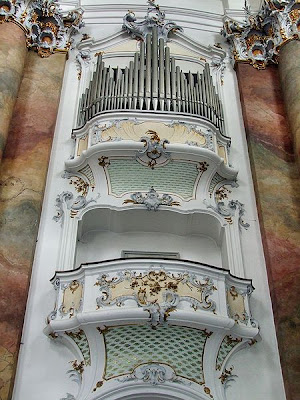 The organ is divided into a main organ (without organ case) located on the rear gallery and two separated organs, located on balconies on the left and right sides of the gallery.

The construction of this organ is a turning point in the organ building history in South Germany after the war. Almost 200 years after the end of the construction of the Baroque basilica, the third organ, planned since the beginning, became a reality. As organ building techniques have developed, the instrument profited from the introduction of electrical sliderless chests and the introduction of a mechanical shove coupler. Even if many aestetic and architectural characteristics adhere to old techniques, extremely innovative ideas are introduced: the composition is inspired by the neo-Baroque period borrowed from North Germany.

Over the time, the abbey church created its own culture and its own musical tradition with, in the beginning, with these two chancel organs build by Charles Joseph Riepp that are known to be perfect examples adapted to 18th century South-German catholic world. The new gallery organ was designed by Arthur Piechler (1896-1974) and Dom Albert Hohn (1911-1997) who were conscious to create something new and durable.

A mechanical action console was used for the main organ (manuals I, II, III and main pedal) while an electric console, located on the gallery, was used for the complete organ (I,II,III,IV,V and pedal). This instrument was inaugurated on June 22, 1957. 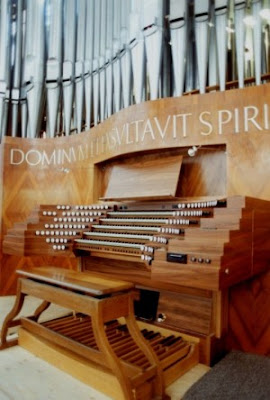 As each instrument is subject to wear due to usage, Mary's organ, after 45 years of intense use, is no exception. At the same time, organ requirements have changed over time: the instrument was ideal for the literature played at that time. Today, there is a need for greater dynamic range: a requirement that sows a seed of doubt about the presence of an organ in the gallery. These increasing needs require a more powerful instrument, i.e. greater wind power and accessories to ease the organist's task.

The revision, executed in 2001-2002 by organbuilding firm Johannes Klais, from Bonn, had, as main objective, to preserve the indisputable qualities of the instrument while introducing technical and tonal corrections. Thus, by eliminating the panels erected between pipework of different divisions, the sound projection was improved. The visual aspect was preserved thanks to space reduction between the ranks of pipework and this, despite the addition of four new stops. 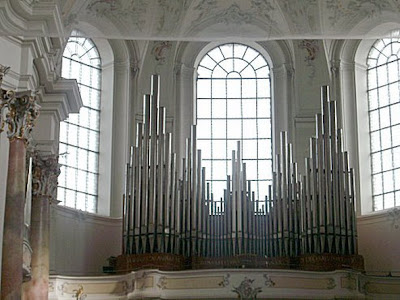 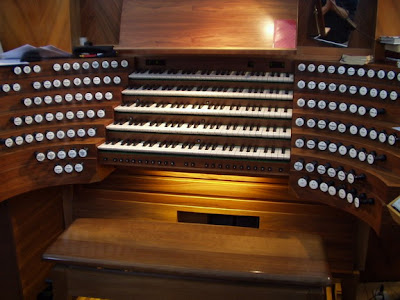 The most important modification is, without doubt, the rebuilding of the console. The two consoles from 1959 - the electrical console and the mechanical "en fenêtre" console - were merged into a single central console that takes into account the mechanical action of the organs and the two Récit divisions. Stop drawknobs on the new console are located, in an ergonomic layout, on semi-circular stairs that allow a comfortable proximity and without obstruction. An electronic combination was installed and manual couplers were added.

The number of stops was carefully increased. Scale plans, as used by Dom Albert Hohn and preserved in archives by organbuilding firm Klais, show the approach he used based on writings by Charles Joseph Riepp and Aristide Cavaillé-Coll. For obvious reasons, these plans were rigorously applied when the organ was built and for the design of the wind system. These scales were specially useful during revision works: the addition of 32' Contraposaune in the pedal division; the free coupling of the Bombardwek division with its stops under high wind pressure according to English organbuilding; the addition of an 8' Doppelflöte as reinforcement in the Hauptwerk division, and the addition an 8' Gamba as reinforcement in the Positiv division; the addition of manual couplers that add warmth and abondance; and the installation of a new wind system with necessary adjustments to valves. This unification, carried out in a brand new way, became possible, with an old charm and a new force : the unique nave of the basilica can, now, be filled with majestic sound. 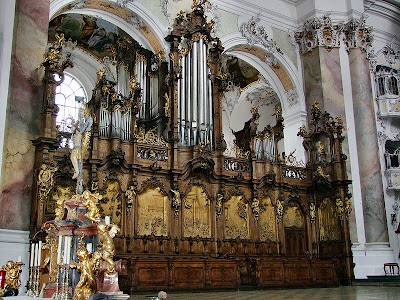 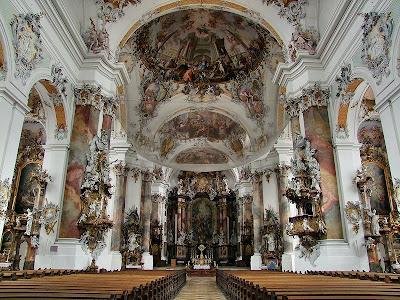 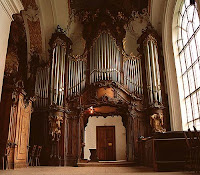 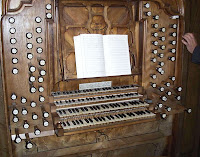 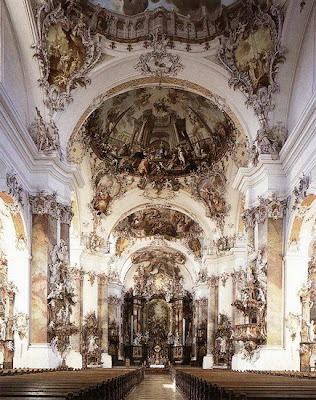 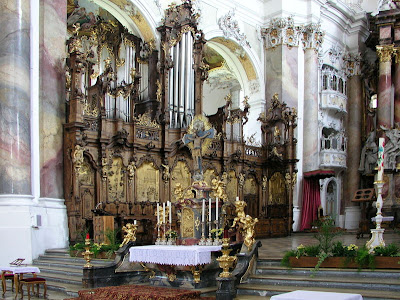 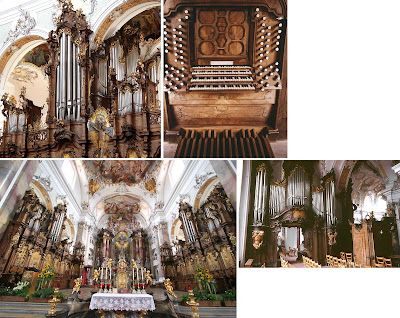