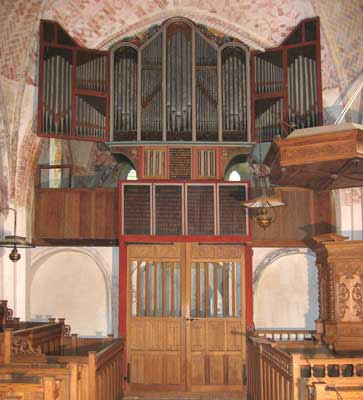 The organ was built in 1531 by an unknown builder.

Jan Pieterszoon Sweelinck Toccata
Monumenta Musica Neerlandica This is a new recording from this toccata, on the Krewerd organ by Jan Pieterszoon Sweelinck 1562 / 1621, was a Dutch composer, organist, and pedagogue whose work originated at the end of the Renaissance and beginning of the Baroque eras. He was among the first major keyboard composers of Europe.


The Krewerd organ is an organ built in 1533 in a small village in Groningen:

In this video Jan Steen and I used pictures by H. Edskes & E. Kooiman of the organ.

Upon entering the church, the organ immediately draws attention. Because of the grey patina and the weather-beaten tin of the front pipes the organ radiates an impressive and long history. The organ, from an unknown builder, goes back to 1531. It is one of the most ancient still playable organs of the Netherlands. A curiosity of the organ are the panels on the left and the right sides. The painted pipe work dates from 1634.

About the times of change one can only guess. A mention on one of the panels at the front of the organ ín 1634 "met leteren en schilderyen verciert" makes the claim that the hatches have been painted/restored in 1634.
According to the text "dit orgel gants gerepareert" the organ would have been totally renovated in the year 1686.

In 1731 Nicolaas Willenbroek was ordered by noblewoman Ripperda to install a new C and Cis wind chest with corresponding mechanism and manual. Willenbroek was a fellow worker of Franz Caspar Schnitger who died in 1729.

In 1857, Freytag constructed three big pine bellows and the corresponding wind trunk. The oak channel to the chest had to be increased in size. To situate these bellows behind the organ the bay of the choir was largely covered with a balcony.
Freytag replaced also the Quint 1 ½ ft bas/ Sesquialter 2 ranks discant by a stopped Flute 4 ft and the Mixtuur 4-5-6 ranks by a Gamba 8 ft discant.

In 1974/1975, restoration by organ builder Albert Hendrik de Graaf. Repair of the leaking wind chest without altering the original construction. New switches and nameplates. Restoration of the manual and the pedal. Restoration of some damaged pipes. Change of the Gamba discant by a Sesquialter 2 ranks discant.

In agreement with the restorers of the church the bellows in the SE-corner of the choir were situated on the ground floor.

The organ of Krewerd survived several wars and floods; however in 1967 the final curtain seemed to fall. The state of the church building was abominable. People even spoke about demolition of the building and the selling of the organ. But the church warden of the independent Dutch Reformed Community Krewerd, farmer Marten Alje Bos protested fiercely against this threat. And with success. Bos was supported by others, including the mayor at that time, Mr. Brons.
Church and tower were restored by Monumentenzorg (monument care). Organ builder/restorer Albert Hendrik de Graaf (* reference footnote to biography of Mr. De Graaf) took very good care of the organ.
He writes:
From 1968 onwards they put the organ in my care. I was allowed to mend the instrument during the period of 1972-1975. This restoration had a preservation intention. It was very important that the sound was not going to be damaged. It seemed to be better to replace the pipes without alteration, after restoration of the wind drawer. In only a few cases were repairs unavoidable.

Specification
The specification has been unchanged, from the renewal in 1731, with the exception of the Mixture and Sesquialter, removed in 1857.

The ages-old gothic organ with its maximum of resonance and volume and also with the very attractive radiant voices is from a rare and rugged sort of beauty.
It's a miracle that in the remote landscape of Groningen this precious instrument in the old church of Krewerd has been preserved during all these years.

The specification is as follows:
Manual: C D E F G A - c3 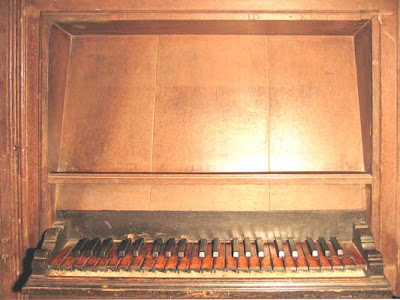 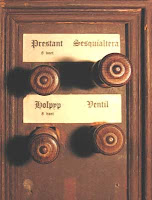 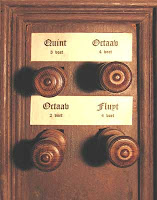 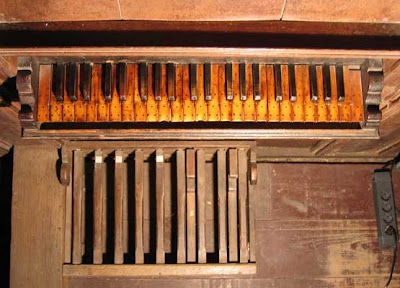 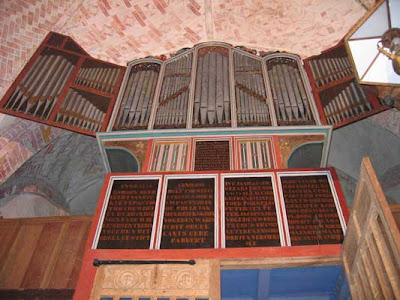