1888 Cavaillé-Coll organ at the Church of Saint Sernin, Toulouse, France 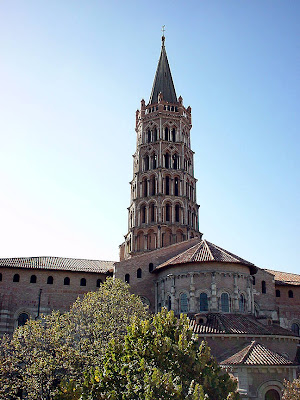 The basilica also contains a large three-manual Cavaillé-Coll pipe organ built in 1888. Together with the Cavaillé-Coll instruments at Saint-Sulpice in Paris and the Church of St. Ouen, Rouen, it is considered to be one of the most important organs in France.

The organ at St. Sernin was inaugurated in 1889 by Guilmant with 54 stops on 3 manuals and pedal. From the beginning it has been recognized as an important work of art and it remains essentially unchanged today.

Charles Ives' ultimate "Americana" piece, performed by an American artist -- on a French organ. George Baker recorded this in 1976, to celebrate the American Bicentennial.

Myron Roberts' Prelude & Trumpetings: one of the great American compositions of the 20th century.

George Baker, probably the world's only concert organist/dermatologist, recorded this in 1976. As a tribute to the American Bicentennial, Dr. Baker recorded an all-American disc -- on a French instrument. In fact, one of the consummate French organs, the 1889 Cavaillé-Coll at St. Sernin in Toulouse. It's a III/54/73, & is a superb example of the argument that you don't need a huge instrument to make a very impressive sound. Don't be misled by the quiet opening; this piece finishes with a flourish of amazing C-C reeds. 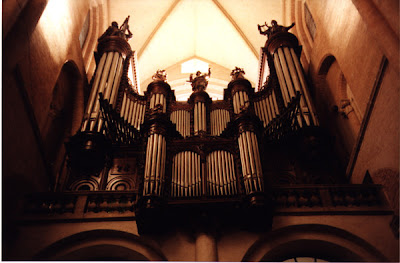 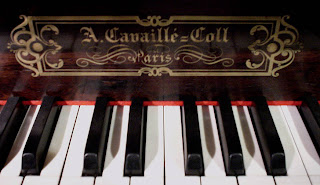 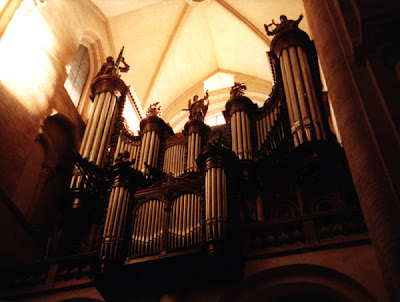 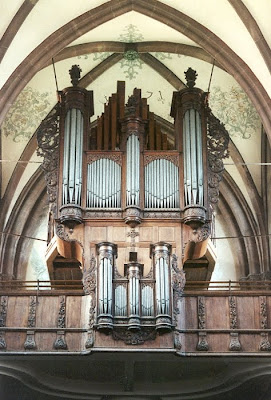 
In 1710 Andreas Silbermann (1678-1734) built a new organ for the Abbey Church at Marmoutier. Earlier Andreas and Gottfried, his brother, had worked together, but Gottfried had not long before left Strasbourg for Saxony, in order to set up his own organ- building concern there. In fact, both Andreas and Gottfried had traveled a bit, and Andreas himself had worked in Paris with Alexandre Thierry from 1704-1706. While he was there, Andreas absorbed the fundamental elements of Parisian - - therefore French Classical - - organ building. The Marmoutier organ, like his other instruments, has the technical construction and pipe scaling of a classical French organ. On the other hand, the voicing gives the instrument a German accent: the Plein jeu is stronger, and the stopped flutes have more color in their sustained tone.

In its overall design, the Organ case appears to be that of a typical French Classical organ. When you look at it,

* you see only two divisions (Grand Orgue and Positif).
* you don't see any sign in the façade of the Pedal and/or Récit divisions.
* you see all pipe feet standing at the impost level.
* you see rounded towers,
* and the taller towers of both cases are at the extremes, not in the middle. 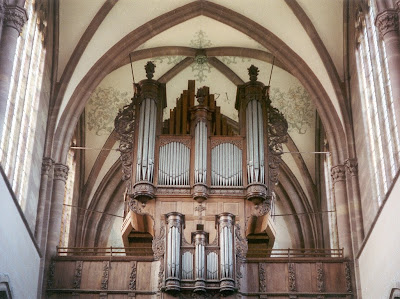 When the organ was built, it consisted of only two manual divisions (Hauptwerk and Rückpositiv) and a single stop in the pedal: a 16' Subbass. In 1746, the organ was enlarged by Johann Andreas Silbermann - - Andreas' son, who was continuing the family business of organ-building in Alsace. He added

* a Récit division, which is located in the usual Echo position in the case,
* four new stops to the Pedal,
* and a Cromhorne to the Positiv.

When you first go to the keydesk, you might be surprised to find that the stopknobs for the Positiv division are behind you, in the Positiv case itself. This is not an unusual arrangement on Andreas' instruments. 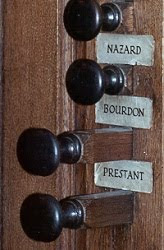 on the left, you will see a detailed photograph of the first three stop knobs. I know you've already noticed that the pitch designations are not included. I want you to look more closely at them, though, because they are in order as the pipes stand on the chest.

The Prestant, whose pipes are in the façade of the Positiv, is first, followed by the 8' Bourdon and the Nazard. The sequence continues upward through the Doublette, the Tierce and the Fourniture, with the Cromorne -- whose pipes are closest to the player on the bench -- at the top of the row.

You should notice the difference between this arrangement and the one you are familiar with as the "standard" arrangement of listing stops strictly in pitch order. This example illustrates in part the origin of the standard -- taller pipes are usually placed at the front of the case, shorter ones at the back. In this instance, however, even though the pipes of the first two stops are of almost identical length (the bourdon being composed of stopped pipes), the Prestant comes first because those are the pipes that should be visible.

In 1915 the pedalboard was replaced with the usual German type: a flat, straight pedalboard, having the long keys associated with German, British and American organs. Of course, no machine can last for more than 200 years without some mechanical problems developing, and the organ at Marmoutier is no exception. After WWII it was in need of heavy maintenance and repair work, and in 1955 the organ was restored by Ernst Mühleisen and Alfred Kern of Strasbourg, working under the supervision of Albert Schweitzer. They made only two changes to the instrument:

* They added two notes to the pedal, giving it a compass of C-d' in order to play more works of Bach.
* They made a stop action for the pedal flutes.

With the exception of this work in the twentieth century, the organ remains as it was after the completion of Johan Andreas' additions in 1746. The chests, manual keyboards, action and pipes are all original. The work done by Mühleisen and Kern is still regarded as a model of restoration, and, along with the organ at Ebersmunster, the Marmoutier organ is one of the two most well-preserved Silbermann organs today.


The Silbermann organ... Three centuries of history :
> 1707: contract signed between André Silbermann and Anselme Moser, Abbott from 1702 to 1733.
> 1709-1710: installation of the organ but certain divisions remained empty. André Silbermann nearly lost his life because of a blow from an adze inflicted by a drunken workman.
> 1719: order for a positive for the abbey choir.
> 1746: completion of the Marmoutier organ and the one in St.Quirin in by Jean André Silbermann.
> 1755: improvement of the blower (Jean André+ Gottfried).
> 1765: dust removal after work in the choir (Jean André + Jean Daniel).
> 1772: repair of the blower (Sauer, a workman from Silbermann's team).
> 1805: threat of the organ being bought by the parish of in .
> 1872, 1887, 1915, 1930: various tunings, renovations and denaturation: nazard on the positive converted into 4-thirds flute of the positive removed.
> 1951: Birth of the association, the Friends of the Silbermann Organ of Marmoutier on the initiative of Marcel Thomann with the support of Albert Schweitzer.
> 1954-55: renovation to its original condition by the organ builders, Mulheisen and Kern.
> 1975: dust removal after interior renovation of the abbey (Kern of Strasbourg).

It is part of the history of Alsace that names of stops and divisions of this instrument show a mixture of German and French, just as the sounds themselves are a blend of the two organ-building traditions.