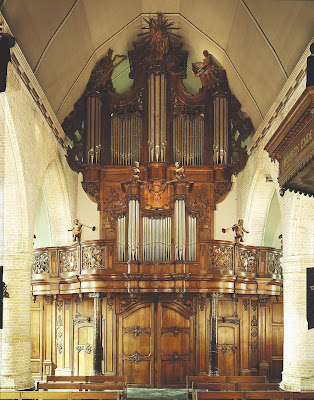 The organ was built in 1778 and represents a unique rococo instrument. This organ is the in the art of organbuilding by the family Van Peteghem who, between 1776 and 1787, enriched Flemish organ with a number of organs. They are esthetically the best which were made at the time. The Haringe organ is no doubt the best preserved instrument of that period. It not only survived because of its solid construction but it escaped all the different tastes in organ-building and renovations over the years. The organ has never been rebuilt and the different registers have never been modified to bring them into line with new tastes. On top of that it has an extensive stop list. The combination of all these elements makes this organ the embodiment of the Flemish organ collection which is recognised by organ-players all over the world. The organ has been renovated by J.P. Draps en G. Potvlieghe under supervision of the department of Monumentenzorg (Mr. Fouconnier en P. Roose) and took place in between 1993-1994. 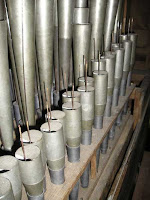 1092 pipes have been placed in front of the Great Organ as well as 54 (which were not origionally there) extra at the last renovation(Bombarde 16'). For the Positiv, 627 pipes have been used as well as 150 for the Echo division. Together with the 6 pipes of the Tambours makes it a total of 1929 pipes. The action is completely mechanical and the pedal board is fixed to the Great. All stops with the exception of Bombarde have been made by van Peteghem himself. 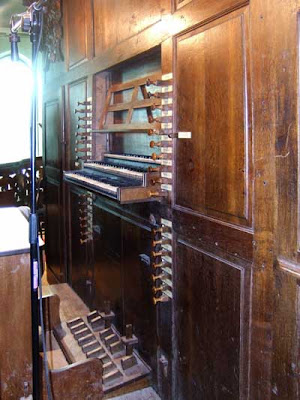 The specification is as follows: 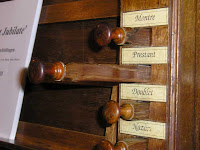 In 1777 it was decided to demolish the old organ and to build a new one.
The reverend Franciscus Voormezele, he was then priest of Haringe, was a passionate music-lover. Thanks to him Haringe is in the possession of its beautiful organ, built by the organmaker Pieter Van Peteghem in Gent. (1708-1797)

In 1733 he settled in Gent. Soon he was a famous organbuilder and he outperformed all his fellow organ builders.

The organ was ordered for in 1778, and was finished and placed in a year. The cost was "far above 5000, close to 6000 guilders". The sculptor was Jean Elshoecht, born in Brussel but later living and working in St. Winoksbergen (Bergues, French-Flandres). For his exceptional work of art he received 350 French crowns.

On 17th of april 1779 the first performance concert on the organ took place. The organ is maybe the most original of all organs made by the dynasty Van Peteghem. It survived not only by it's solid construction but there were never changes. The stops were never adjusted to the different tastes and trends during the centuries. Currently it still has its original structure. The exceptional pedalsystem and, the old "trommelenspel", are the only ones of their kind well preserved and still in use.