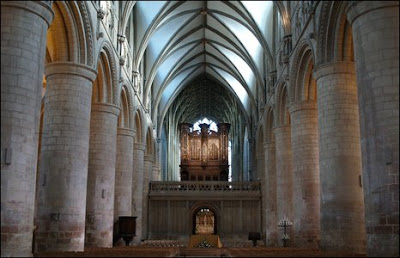 The firm of Nicholson and Co (Worcester) was chosen in 1999 by the Dean and Chapter to carry out a full restoration of the Gloucester organ.
The intention was to maintain the wonderful integrity of the instrument as designed by Ralph Downes and John Sanders in 1971, when the tonal scheme adopted a much more classical approach.
This rebuild was a very controversial one, but one which we believe was very forward looking and one of the best examples from the 1970s. 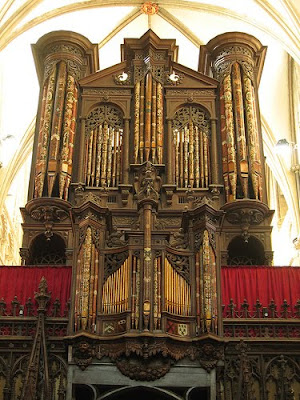 The oldest part of the organ case at Gloucester dates from 1579
and it is the only English cathedral organ from before
the Restoration to remain in its original position.


A synopsis of the work carried out between April - October 1999 is as follows:
The ingenious electro-magnetic action, designed in 1971 by John Norman, has been fully restored, using the most modem, silent components
The soundboards have been renovated
The pipework has been cleaned and fully re-regulated
A new solid state transmission system has been installed
A replay system, based on a standard IBM compatible computer, will be included at a future date 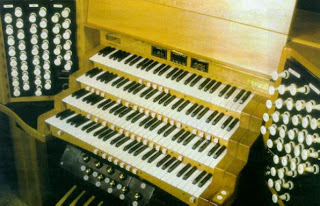 The console technology has been upgraded, to included a stepper, 384 levels of general pistons, 64 levels of divisionals, pedal divide etc
New drawstop solenoids have been fitted
A Swell Sub Octave stop has been added
A new 32' Bombarde has been placed within the screen, with half-length zinc resonators for the bottom octave
The pedal organ has been augmented by a 32' "Cornet Separe" (a la Cavaille-Coll), to include a new Quint 10 2/3', Tierce 6 2/5' and Septieme 4 4/7' (big scale, metal pipework, tuned in mean temperament, voiced with very few harmonics and placed on a new soundboard within the screen)
The roof of the organ has been removed, thus allowing the nave vault to act as a sounding board (as it did 1717-1971!) thereby considerably enhancing the power and fullness of the instrument 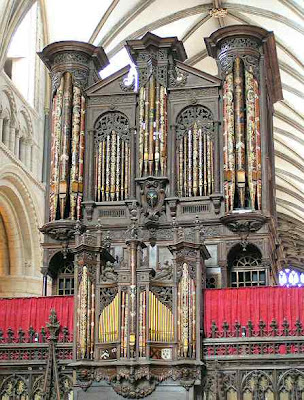 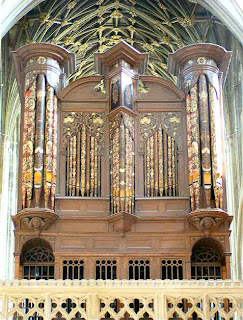 
from leaflet for the re-opening of the Cathedral Organ, January 2000;
Great Stopped Flute 4 missing from list in above (DBe) 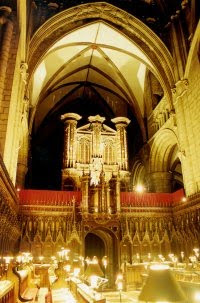