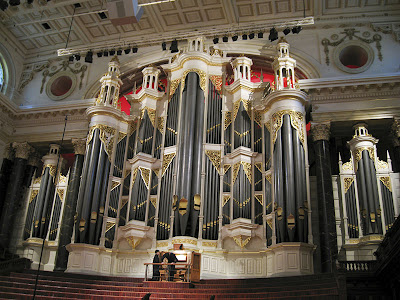 This monumental organ is one of the grandest and greatest in the world today, boasting speaking stops with wind pressures ranging from 3 1/4" up to 10" for the Tuba Chorus.Its immense case looms 64' wide and 32' in height crowned with the low octave of the Pedal Open Diapason 32'. This was in 1888 the largest organ in the world. This is the only organ in existence that possesses a full length 64' reed!

Built in London by William Hill and Son, the Grand Organ was shipped to Australia and installed in 1890. It was then the largest organ in the world and is still the largest ever built with tubular-pneumatic action. Its 126 speaking stops and 14 couplers are spread over five manuals (Choir, Great, Swell, Solo, Echo) and pedals. There are approximately 8,700 pipes.

The first recital was held on Saturday 9 August, 1890 at which the City Organist from Liverpool, England W.T. Best performed for 4,000 guests.

The organ was restored between 1972 and 1982 by Sydney organbuilder Roger H. Pogson and is used regularly for performances, including many played by the City Organist, Robert Ampt. 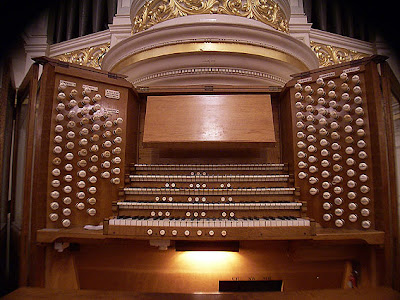 Built between 1886 and 1889 by Hill & Son, of London, the instrument was instantly famous for then being the world’s largest organ and for the novelty of its full-length 64-foot Contra Trombone stop. It remains the world’s largest organ without any electric action components and is of international significance as representing the pinnacle of British achievement in the Victorian era, even though its conservative design was the subject of debate at the time. It is easily the best-known of all Australian organs and is the source of admiration around the world, not only for the immensity and opulence of its tone and for its magnificent case, but also for its high level of originality and the quality of the restoration work.

Although the organ is considered substantially original in condition, several changes have been made over the years. The most significant of these was the lowering of the pitch to concert standard by S.T. Noad in 1939, this change being most noticeable in the reed stops, which are coarser in tone colour as a result. A comprehensive restoration was undertaken over ten years from 1972 by Roger H. Pogson Pty Ltd and many of the minor changes (such as the swapping of ranks between Swell and Choir) were reversed. Other changes retained to the present are the balanced swell pedals (the provision of which necessitated the removal of four composition pedals for the Great), the concave/radiating pedalboard, the transposition of Swell Piccolo from 2’ to 1’, the addition of the high-pitched Carillon bells to the Solo, the enclosure of the Solo orchestral reeds and the enclosure of the entire Choir division (originally only the reeds were enclosed). During the work carried out by Roger Pogson some alterations were made to the pneumatic action operating the Choir division and the console timbers (originally in fumed oak) were lightened during repolishing. 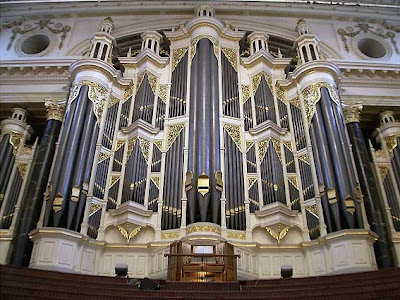 Mechanical action with pneumatic-lever
assistance for Great and couplers
marked #