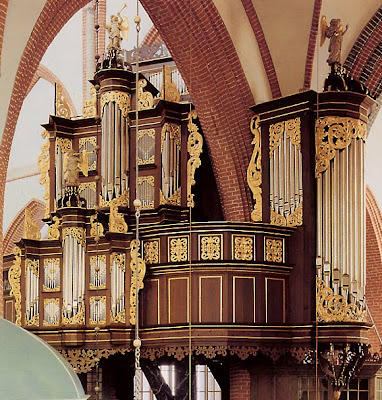 
III/77 Arp Schnitger organ (1686, 1691/92) of the Ludgerikirche, Norden, Germany, restored by Jurgen Ahrend, 1981-85. The contract for this well-known instrument was signed on February 26, 1686. Following Schnitger's addition of the Oberwerk in 1691/92, the organ became the largest and most important in East Frisia. Incorporating several ranks from the previous 1616 Edo Evers organ, the instrument remains the second-largest surviving by Schnitger. 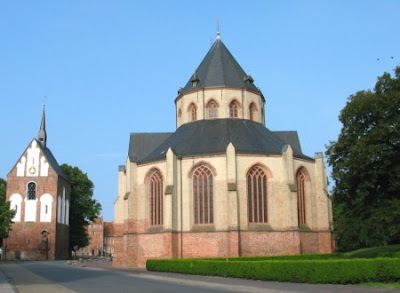 1686-1688: Construction of a new organ by Arp Schnitger, using pipework of the previous organs by Andreas de Mare (1566/1567) and Edo Evers (1616-1618). Case and tracker action mechanism were completely new.
1691-1692: Schnitger added a fourth work (Oberwerk) to the organ. This work was playable from the third manual of the Brustwerk.
1838: Tuning of the organ in equal temperature.
19th century: Many alterations to the organ. Ranks were replaced, the sound characteristics of the organ changed into what was deemed necessary in those days. The mechanism, however, was not changed.
1917: Removal of the front pipes for the first World War. At this time only half of the ranks were still present.
1929/1930: First restoration (Orgelbewegung) by Furtwängler & Hammer. Christhard Mahrenholz was the adviser. The last two reed-stops were replaced. For the first time other Schnitger-organs were investigated into, to make copies of the ranks that had been removed. The mechanism was exchanged for an electro-pneumatic installation.
1943-1945: Removal of the organ to the monastery of Möllenbeck to save the organ from possible bomb attacks due to the war.
1948: Rebuilding by Paul Ott.
1957-1959: Restoration by Paul Ott. New tracker action mechanism.
1981-1985: Restoration by Jürgen Ahrend to its original (Schnitger) situation


Bernard Foccroulle demonstrates the three basic organ ranks: the principals, the flues, and the reeds. The organ shown is in Norden, Germany, and was built in 1688 by Arp Schnitger. It was restored in 1985 by Jürgen Ahrend.

Buxtehude: Toccata in d minor, BuxWV 155. The organist is Bernard Foccroulle, he plays on an Arp Schnitger organ built in 1688 in Norden, Germany (organ restored in 1985 by Jürgen Ahrend).

The organ of the Ludgerikirche (Norden) (1686-1693) was built by Arp Schnitger.It has 46 registers, three manuals and pedals and it is, after the organ in the Jacobi Church in Hamburg, Schnitger's second-largest surviving work in Germany and the largest organ in East Friesland. Historically and musically it is a work of art of international stature.

The previous organ of the Evangelical-Lutheran Ludgerikirche is from Edo Evers (1618), who used parts from the old pipe organ by Andreas de Mare (1567).The instrument had 18 registers, three manuals and pedal appended. By its placement on the south choir wall behind the present location, it could not be heard in the pulpit.

Schnitger built in the choir loft, an acoustically favorable space, so that the new organ could develop its sound into the transept and the nave. Unique and visually appealing is the design of a single pedal tower at the southeast Vierungspillar with sound direction into the nave. Schnitger integrated eight old stops of de Mare and Evers in his work. The preserved stops are of special quality.
The new organ has 46 registers, four work divisions on three manual keyboards and pedal.

Alterations in the 18 and 19 Century

In the 18th and 19 century several registers, keyboards and bellows were replaced in the course of repairs and adjustments to the current taste. In 1917, the tin-containing Prinzipal pipes had to be relinquished for military purposes. 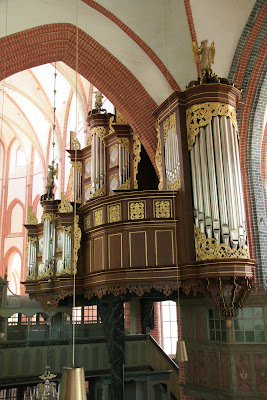 Restorations in the 20th

The long phase of restoration in the 20th Century begins in 1927 at the start of the Orgelbewegung with the investigations of Christhard Mahrenholz and Hans Henny Jahnn, and in 1929/30 the company P. Furtwängler & Hammer restored the organ after some of the findings of the time. However, the absent keys of the short octave, and sounds cis3-gis3, were added pneumatically, and a fourth keyboard was installed to be able to play Brust- and Oberpositiv separately. Oberwerk and pedal got a pneumatic action. After removal of the organ (1943) and Reconstruction (1948) Paul Ott introduced changes in 1948 and 1957-1959 through various renovations, but the sound ultimately could not satisfy. Because of the lowered wind pressure even changes were made to the pipe work.

Only through the restoration to historic origin, according to strict standards by Jürgen Ahrend (1981-1985), the old sound is restored to its full glory.
Ahrend reconstructed 25 stops, the keyboards, bellows, wind ducts, check valves, tremulants and part of the mechanics. In particular, his reconstruction of the principals and reed stops is considered as being masterly.

The modified meantone, which specifies a underlying comma 1/5-, leading to great purity of the organ sound without so-called wolf fifth, has since then been applied in other renovations and new building.

The organ of the Ludgerikirche (Norden) (1686-1693) was built by Arp Schnitger. It has 46 registers, three manuals and pedals and it is, after the organ in the Jacobi Church in Hamburg, Schnitger's second-largest surviving work in Germany and the largest organ in East Friesland. Historically and musically it is a work of art of international stature. 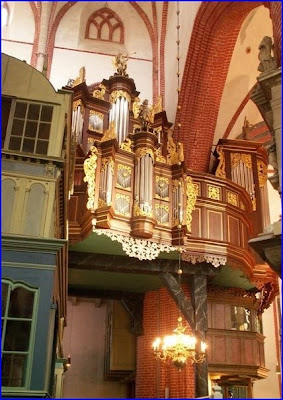 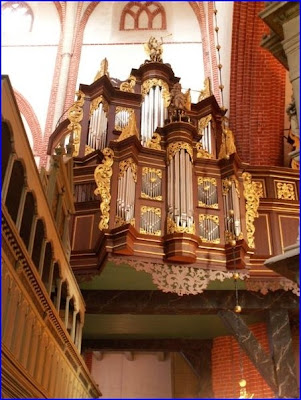