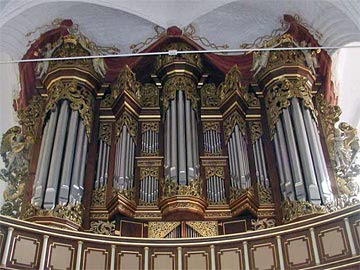 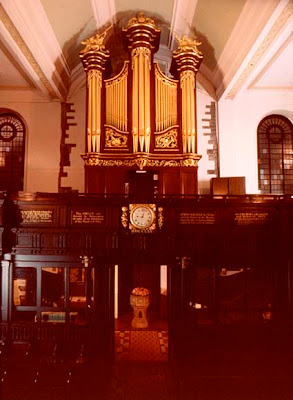 The history of the Organ at St Mary's

The Vestry decided to rebuild St Mary's as early as 1705, but a faculty was not applied for until 1714; and although on 9th March 1715 it was recorded that the parish church is now finished in Pewing, not until 1746 did they decide to complete the tower and in the following year to provide it with bells. A further eighteen years elapsed before the new church was provided with an organ. Until then a small band of musical instruments led the singing of hymns and psalms.

The history of the organ begins with a vestry minute of 24th April 1764: -

Whereas many of the Parishioners have expressed their desire of having an Organ erected in this Church which they apprehend would be not only a very decent Ornament but also add to the Solemnity of Divine Service, we do unanimously agree that an Organ will make a very useful and agreeable addition to this Church and therefore authorise and desire the Churchwardens to erect the same as soon as possible.

The vestry also agreed that the expense of erecting the organ should be met by public subscription and at a subsequent meeting that the organist's salary be defrayed from the annual rate. The Churchwardens lost no time in starting the process of obtaining the necessary faculty from the Bishop of Winchester (of which diocese Rotherhithe was a part). The faculty was granted on 22nd July, it was decided that the organ was to be placed in the west gallery and to measure 21ft high, 12ft wide and 6ft 9inches deep with a further 2ft for the organist's seat. It was necessary to state these dimensions precisely to help establish that no regular worshipper would lose his or her seat through the space taken up by the instrument!

The organ is enclosed at the front by a polished mahogany case and at the back by dark stained wainscoting of pine standing between the case and the west wall. The breadth and depth of the organ as it stands today are exactly the same as the measurements stated in the faculty (organ stool excepted) leading to the unavoidable conclusion that the organ has occupied the same west gallery floor area right from the beginning and that the wainscoting was part of the original construction.

The organ retains more of its tonal qualities than any comparable instrument of its date. It is important for the understanding of 18th century church music and has attracted recitalists from far and wide. Nevertheless its original purpose of providing accompaniment for services at St. Mary's remains paramount.

A detailed description of the organ is to be found in the monograph by Austin Niland 'The Organist at St Mary's, Rotherhithe', published by the Positif Press ISBN 0906894115. 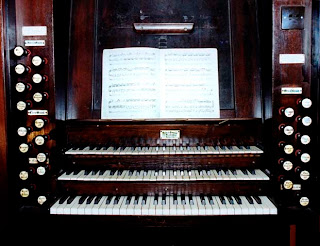