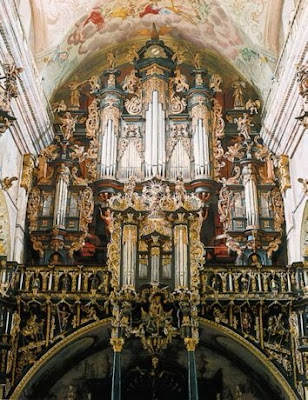 The organ at Leżajski is one of the most valuable monuments of art in Europe in terms of organ construction and ornamentation of the instrument. The organ was built around 1680 by Stanisław Studziński of Przeworska.
Further improvements were done by Jan Głowiński from Krakow, who completed his work in 1693.
Unusually rich decoration, carvings and gilding, was applied by the religious order.


J.S. Bach: Preludium D major BWV 532
Further changes were applied in the years 1903-05 in the romantic style of Alexander Zebrowski, and in the years 1965-68 Robert Polcyn from Poznan worked on the restoration of the baroque sound.
In the years 2000-2003, a thorough renovation took place, which was initially led by the French company Manufacture Provençale d'Orgues, and the then organist Adam Wolański. Thanks to a true appreciation of the value of organ, the last restoration returned the organ to its original musical values retaining its pleasing aesthetic and architectural condition.


The Lezajski organ is not one instrument. These are 3 separate instruments.
On each side a smaller instrument has been built, and in the main nave the great organ is positioned.

The organ traction is mechanical and it has a total of 75 stops. Interesting additional devices are the cuckoo, drum (tympanum), birds and the “horribile” stop.
The pedal has a full vote 32 '- which means that the largest pipe is over 10 meters long. Four decorative cabinets connect all the organs to the main decoration of the choir. The monumental facade fills the entire the western side of the basilica.


The main organ stands 15 meters high and 7.5 m in width - but it is practically and visually linked to the two neighboring instruments on each side to form a monumental ensemble of organ, on which - the only organ in the world - 3 organists can play simultaneously .


Baroque monastery and pipe organ from XVII century. The fabulous woodcarving decoration of the choir stalls and organ prospect is the work of the Bernardine fathers.


Praeludium and Fugue in C-minor BWV 546 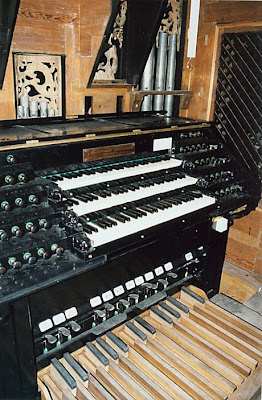 YOU CAN LISTEN TO ANY (OR ALL) OF THE FOLLOWING RECORDINGS OF THE LEZAJSK ORGAN(S) BY CLICKING ON THE LINK BELOW:
TO RETURN TO THIS PAGE AFTER LISTENING, CLICK "BACK" ON YOUR BROWSER.