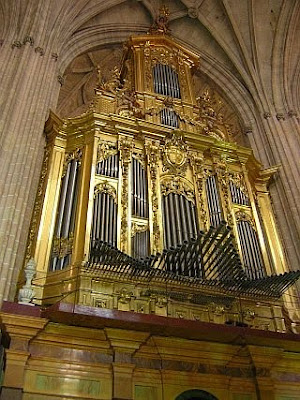 Segovia Cathedral contains organs by José Echevarria and his son Pedro, builder in 1702 of the 31-stop organ Epistle organ in the Cathedral of Segovia, Spain, it was joined in 1772 by an identically cased Gospel organ on the opposite side. 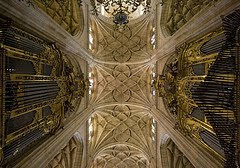 The organs display the thrilling sounds of the horizontal reeds for battle music galore, interspersed with milder sounds. 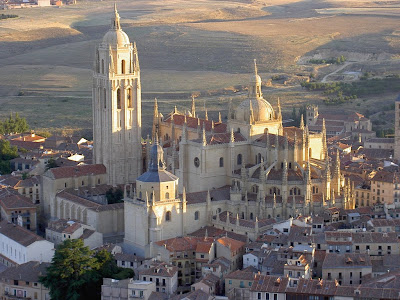 Rick Berg and Sally Lewis play the two organs in the Cathedral of Segovia, Spain. This was from second movement of the Concerto for two organs by Antonio Soler.

A batalla is a piece, in which a military battle is illustrated and in which the organist can use the characteristic reed stops of Spanish organs

Photos courtesy of Martin Doering from die-orgelseite.de and other public sources

Juan Bautista José Cabanilles (September 6, 1644 in Algemesi near Valencia -- April 29, 1712 in Valencia) was a Spanish organist and composer at Valencia cathedral. He is considered by many to have been the greatest Spanish baroque composer, and is sometimes called the Spanish Bach.
He probably began his musical career as a singer in a choir of a local church. Later he studied to become a priest in the cathedral at Valencia, which included lessons in music. On May 15, 1665, at 20 years of age, he was named organist of the cathedral. A year later, upon the death of his predecessor, he became the principal organist. On September 22, 1668 he was ordained as a priest. He kept his position as principal organist for 45 years, but from 1703 on his health often necessitated that a substitute be found. From 1675 to 1677 he also took charge of teaching the children in the cathedral choir.
Many of Cabanilles's compositions are virtuosic and advanced for their time. The majority of his manuscripts are kept in the Biblioteca de Catalunya in Barcelona. Numerous compositions for organ (tientos, toccatas, passacaglias, and other works) have survived, as well as a number of works for choirs of up to 13 parts. 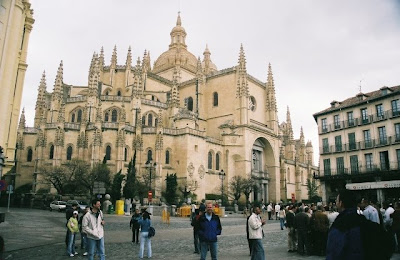 The marvellous cathedral is located in the higher point of the town, standing out as watchtower the tower of the temple. It was built after the fire of the former Romanesque cathedral that took place in 1520 during Carlos V´ s reign. It is 105 meters length by 50 meters wide and 33 meters height in the major nave. It is a three naves temple with three side chapels in the transept, semicircular presbytery and ambulatory.
It has three entrances: in its main facade is located the Puerta del Perdón (Door of Forgiveness), by Juan Guas; in the Southern façade the Puerta de San Geroteo (St Geronteo´ s door) and the Puerta de San Frutos (San Frutos´ door).

Inside, the major altarpiece is sculpted with marbles, jaspers and bronze, and it houses the Gothic image of Nuestra Señora de la Paz. There are 23 chapels with interesting works of art, the impressive major altar, and the exceptional organ, still used, among other elements. It also includes artistic and historic treasures distributed around the temple. In the Cathedral Museum we can find excellent works of art, such as silversmith´ s craft pieces, tapestry, documents, etc. 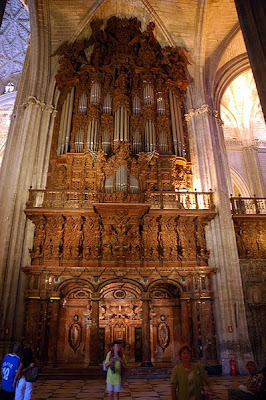