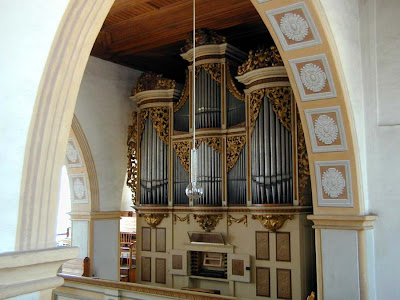 On December 22, 1718 Christian August Freiherr von Friesen closed a contract with Silbermann which also was signed by his co-worker Zacharias Hildebrandt. The document text states that "...the afore mentioned Herr Gottfried Silbermann and Herr Zacharias Hildebrandt between now and Michaelmas (September 29) 1720 promise to make a proficient and well-proportioned organ work...". In 1716 or 1717 Zacharias Hildebrandt had accepted an order to build his own masterpiece, an organ for the village church in Langhennersdorf near Freiberg. Thus he was not able to support Silbermann and consequently was not mentioned in the approval protocol. The organ of the St. Georgen church was solemnly consecrated on November 9, 1721. Johann Kuhnau conducted the celebration music which he had composed on a text by Johann Christian Langbein. 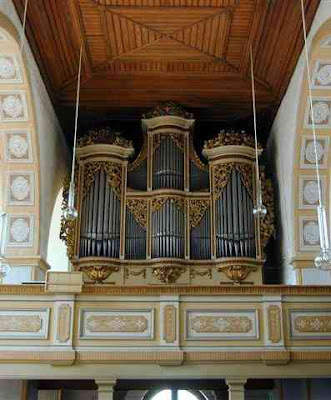 By and large the instrument remained intact in essential parts over the decades. From a number of repairs and interventions, several changes related to the taste of the time with respect to musicians and organbuilders standards can be seen. In addition, both world wars left their scars behind on the organ. In 1796 the Leipzig university organ builder Johann Gottlob Ehregott Stephani installed a pedal coupler; an initially fixed connection between pedal and main manual - as usual with small and medium sized organs by Silbermann - was regarded as disadvantageous. At the occasion of cleaning and repair Ulrich Kreutzbach in 1842 tuned the organ to equal temperament because even a moderate inequality did not meet the taste of the time. Kreutzbach also changed the worn-out pedal keyboard with an entirely new one. Further cleaning actions took place in 1847 and 1897. All these works included minor corrections of the voicing, as can be seen from looking at the pipes.

13 dummy pipes of the facade had to be surrendered in 1917 for World War I; they were replaced in 1930. Already at the beginning of the 19th century some wood worm contamination had been found. In the following years it reached an extent that in 1935 the organ builders company Eule, Bautzen, was commisioned to impregnate all wooden parts - even peripheral ones - of the organ. Cantor Alfred Kirsten strongly pleaded for a restoration following a preservation tendency. A large number of parts nevertheless could not be preserved at all or only partially, so many of them were made completely new. 33 of the wooden flue pipes and 20 reed pipe components had to be replaced by copies. The three wedge-shaped bellows were neither repaired nor copied but exchanged against resevoire-type blowers. At the same time trackers as well as pedal and manual keyboards were refitted, including re-installation of the tremulant which supposedly was removed in 1832.

Comprehensive overhaul works followed 1979/80 by Eule, Bautzen. In WW II the church roof was damaged, leading to water leakage which caused defects of the pedal windchest. After a tentative repair in 1947 these could be fully mended. A large number of parts dating from former repair works were now replaced as close as possible to the original, including a new pedal keyboard and a new organist's music desk based on the model of other Silbermann organs. Again impregnation against wood worm attacks was done. The facade pipes in particular suffer from severe corrosion damages, extending deeply into the pipe material, the causes of which could not definitely be found yet. Since no countermeasures were available for sparing surface treatment it was decided to apply neutralizing wash fluid to prevent further progression.

Apart from the installation of a new blower motor, the wind supply system, wind pressure and reference tone remained unchanged. In the years after 1930, Guenther Ramin, organist of the Thomas church in Leipzig, managed to promote the instrument in a way that it was exposed to the interest of a broad public. Since then numerous distinguished organists, national and from abroad, have been performing in Rötha, which is also a place of pilgrimage for many tourists.


Marie-Claire Alain speaks about Johann Sebastian Bach chorales and plays an excepert of the Christmas chorale "Der Tag, der ist so freudenreich" BWV 605 at the Silbermann organ of the Georgenkirche in Rötha 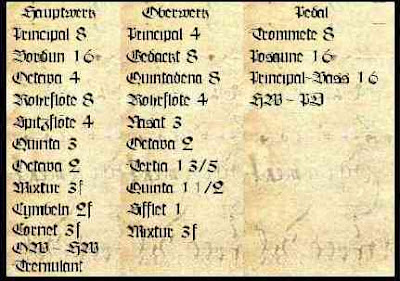