Great musicians such as Bach, Handel etc. wrote their music for the organ as an expression of their faith.

May you, as you listen to these magnificent instruments, in thought be transported to also glorify your maker. 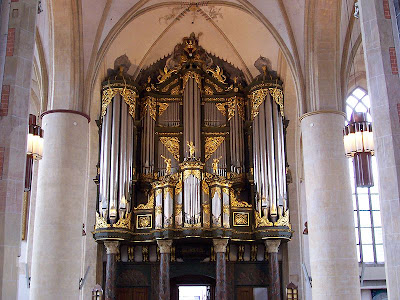 
Celebrated performers like Marie-Claire Alain, Ton Koopman, Gustav Leonhardt, Michael Radulescu, Wim van Beek and Harald Vogel have played the organ in recent years and consider it to be one of the finest instruments in the world both because of its excellent playability (mechanics by Jürgen Ahrend) and its wonderfull sound, in the individual stops (some dating back to the 15th century) as well as in the majestic full organ.


The organ is the only instrument in the world that still possesses orginal 32-foot prestant pipes originally manufactured by the great Arp Schnitger in the years 1690/91.

The Martinikerk organ in Groningen can look back on a long and eventful history. The church itself acquired its present form in the early 16th century. The original three-aisled cruciform basilica dates from around 1220 and was enlarged in around 1425 with the addition of a high Gothic chancel. Some twenty-five years later the nave was rebuilt, resulting in the Gothic hall church that we know today. A Renaissance chapel was added next to the north tympanum at the beginning of the 16th century. Meanwhile, the tower had been struck by lightning in 1465 and collapsed. Rebuilding work on it was not completed until 1550. Ninety-six metres high, this Martinitoren is the pride of the town.


The Martinikerk's first organ dates from around 1450. This instrument was rebuilt in around 1482, probably by Johan ten Damme. Expert advice was provided by the famous humanist Rudolph Agricola, who was Groningen's town clerk at this time. It must have been a particularly fine organ as the present instrument still contains a number of pipes dating from 1482, attesting to their exceptional quality This Gothic organ was altered, enlarged and rebuilt in the Renaissance style in 1542 by an unknown builder. It was further rebuilt and enlarged by Anthoni Verbeeck in 1627/8, by Jan Helman in 1685-90, by Arp Schnitger in 1691/2, by Frans Caspar Schnitger and Albertus Anthoni Hinsz in 1729/30 and again by Hinsz in 1740.


Marie-Claire Alain plays extracts from Fantasy and Fugue in G minor BWV 542 at the Schnitger organ in Martinikerk (Groningen) and she speaks about Johann Sebastian Bach.


Jan Helman was still working on the instrument when he died in 1690, and it was left to Arp Schnitger - arguably the most famous organ builder of his day - to sort out the resultant problems. Schnitger needed three whole days to draw up a plan fur restoring the organ to working condition. This plan was submitted to the town council on 9 June 1691. Schnitger's assistants started work in July and the instrument was formally handed over in February 1692. That same month a new contract was drawn up with Schnitger for two large pedal towers that were to include a new 32' Prinzipal in addition to the existing pedal pipes. This commission, too, was energetically taken in hand and by December 1692 the enlarged instrument was finished. The cases for the new pedal towers were the work of the cabinet maker Allart Meijer, who often collaborated with Schnitger in Groningen. The Martinikerk now boasted a large Baroque organ in the north German style.

In 1728 a new organist was appointed in the person of Jacob Wilhelm Lustig. A native of Hamburg, he was to remain the Martinikerk's organist until 1796. And it was he who expressed the wish that the instrument should be restored and enlarged, a task entrusted to Arp Schnitger's son, Frans Caspar, in 1728. The work involved not only repairing and renovating the instrument but, above all, adding a new Rückpositiv, installing new slider-chests for the main manual and replacing parts of the Pedal. Frans Caspar died in March 1729 and the work was completed by his master journeyman Albertus Anthoni Hinsz. Hinsz was also responsible for repairs in 1740, when the opportunity was taken to add seven new stops to the Rückpositiv, space having already been left for them at the time of the rebuilding work of 1729-30. The result was a sizeable instrument of 47 stops.

In the course of the 19th century, the instrument was repeatedly repaired, rebuilt and enlarged. By 1854/5 the organ had 52 stops, but of these only 27 dated from the period before 1740. The instrument suffered appallingly at the hands of a whole series of builders during the first half of the 20th century, with the result that it was now felt to be more or less beyond rescue and scarcely worth regarding any longer as a valuable historic organ.

In 1971 the organ was removed while the church itself was restored and the question inevitably arose as to whether a restoration or reconstruction was still possible or meaningful. After detailed surveys a plan was drawn up that envisaged restoring the instrument to its 1740 state, while retaining a number of later changes, at least to the extent that these could be incorporated into the design in a sensible and harmonious way.

Many doubted whether this plan was feasible, but, acting in consultation with the organ expert Cornelius H. Edskes, the master organ builder Jürgen Ahrend succeeded in transforming this ruin back into an exceptional instrument. The work was carried out in two stages, with the Rückpositiv and Oberwerk being restored in 1976/7 after extensive preparatory work. Only when it had been established that the result was a success were the main manual and Pedal restored in 1983/4. By the time that the instrument was again playable in mid-1984, there was unanimous agreement that the Martinikerk organ had risen like a phoenix from its own ashes.
by Paul Peeters and translation Stewart Spencer

8 Short Preludes and Fugues  Prelude and Fugue in C major


1. Ton Koopman at the Garrels organ of the Grote Kerk (Maassluis)
Equal Temperament. Pitch: a'=440 Hz. 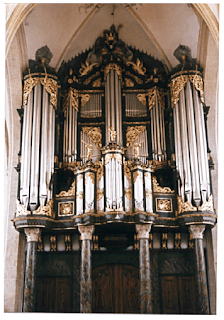