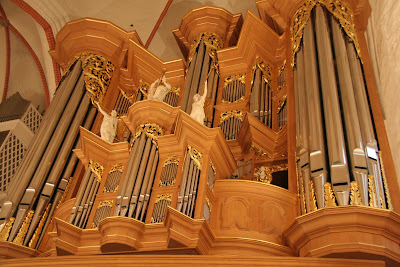 
'Concertato' Prelude from Prelude and Fugue in D BWV 532


Most remarkable without doubt is the famous organ built by Arp Schnitger in 1693. With its 60 stops and about 4,000 pipes it is one of the largest baroque-style organs in northern Europe. The Arp Schnitger Organ of St. Jacobi in Hamburg is the largest Baroque organ of the North German type in terms of its resonant capacity. It is a cultural monument of inestimable value. Its oldest parts date back to the time of the Reformation and have been part of the organ ever since. During the destruction of the church in 1944 some damage occurred to the organ as well, yet more than 80% of its substance remained intact. After major restoration work in 1993, it is now as radiant and beautiful as ever.

Between 1989 and 1993 the organ was completely restored and has been played in every Sunday service since its new dedication on Easter morning of 1993. An instrument of such quality is an obligation: regular organ concerts are performed and a weekly tour of the organ for those interested in its techniques is offered. Because of its organ St. Jacobi is a place of “pilgrimage” for “professionals” – organ builders and organists from around the world. In 1995, St. Jacobi hosted an international symposium on north German organ and figural music of the 17th century.


The Arp Schnitger Organ of St. Jacobi possesses the largest collection of pipes from the 16th and 17th centuries to be found in one single instrument. Approximately one quarter of them dates back to the days before Arp Schnitger, among which are pipes from the "dynasties" of the famous organ builders Scherer and Fritsche. Thanks to their skills and fame, Hamburg became an outstanding location in the development of organ construction from the late 16th century onwards.
However, it is not merely the age of Arp Schnitger's organ nor the number of round about 4,000 pipes which constitute the instrument's extraordinary value: The pipes have a striking sound and are set together in a most skilful manner. Moreover, the diversity of the 60 stops is breathtaking. Thus St. Jacobi has become a place of pilgrimage for organists and organ lovers from all around the world because of its organ. Come and visit St. Jacobi and the weekly organ concert and guided tour through history and construction of the organ every Thursday at noon (free of charge). Or celebrate with us in our services every Sunday morning at 10 a.m. in which the organ has an important part. During the summer months regular organ concerts on Tuesday nights at 8 p.m. are played by internationally renowned organists.

Specification after the restoration 1993


Tuning: Upon the restoration in 1993, a tuning system was chosen which stays close to the historic original, but still allows for a broad band of music to be played.

It is a modified-moderate tuning of the type 1/5 syntonic comma. This system offers a relative purity of thirds in the basic keys. In the peripheral keys F-sharp major and C sharp major, some hard contrasts have to be put up with.

Almost all the works of Johann Sebastian Bach can be rendered on the Arp-Schnitger-organ.

The windchests of St. Jacobi's organ were built by Arp Schnitger. They are made of oak wood. Since the 19th century some regrettable changes to substance had been made. After additional channels were installed, the suspension of the valves was changed, and improper storage had led to splits in the wood, etc. 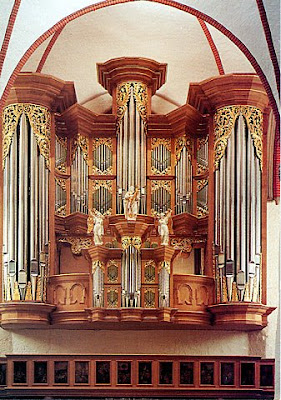 The restoration of Arp Schnitger's organ in St. Jacobi was the most expensive one ever undertaken on a historic instrument. Together with the necessary construction work (support construction for the gallery), a total of 6 million DM (about 3 million US-$) was spent. Thanks to the support of Hamburg`s citizens as well as the willingness of public and church institutions to take responsibility this outstanding cultural monument could be restored in such exemplary manner.
The impulse for restoring the organ to its original state came from an international symposium in 1983. The church council decided to have the organ renovated and appoint a committee of experts. The Dutch music expert and organ specialist Cor Edskes documented the status quo from 1985-87. Afterwards the organ builder Jürgen Ahrend who already had received several awards for renovating historic Arp Schnitger organs, got the commission in 1986.

The restoration work performed at the shop of Jürgen Ahrend in 1993 brought the valuable old core back to its full blossom: the valves run smoothly now and the securely positioned windchests cannot break again.
The wind is now supplied by six wedge bellows (2,4mx2m). In case of an energy blackout they can be foot operated, just like in the old days.

manuals had been destroyed in 1944. In the course of the last renovation a new construction of the manuals was discussed because those inserted by Kemper after the war, did not correspond to the historic example in any way, neither in form nor function and were therefore disposed of. 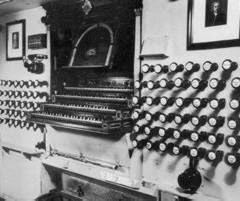 A copy of the construction made by Johann Paul Geycke in 1774 was considered. However, the organ commission recommended a reconstruction true to Schnitger which was thought to be in harmony with the overall concept. The keyboards have keys made of ebony and boxwood. To their left and right are the turned plumtree wood stops. Those have been placed according to order. Their inscriptions match the naming used in a contract by the organist Johann Joachim Heitmann in 1721. This is the earliest information on the spedification given by Schnitger himself.

The Arp Schnitger organ is an excellent example of the North German monumental type. Its base is the very deep and low trombone 32' stop in the pedal.
The 60 stops are divided over the four manuals and the pedal. Every division has a principal plenum, crowned by a multichoir mixture (vielchörige Mixtur).

The oldest pipes of St. Jacobi's organ date back to the time of the Reformation. Arp Schnitger incorporated them into his new instrument which was completed in 1693. E.g., the four lowest tones of the octave 8' in the main traction were made by Iversand/Stüven in 1512, the reed flute 4' by Jacob Scherer in 1546. More than 80% of the old material has remained intact over the centuries. Only the front pipes had to be handed over to the army during , in spite of a storm of protest. Seventeen flute stops of varied constructions and sounds create a unique range of sound quality unequalled by any other instrument. Moreover, there are 15 reeds which are replicates of renaissance wind instruments and add to the colourful range of sounds. Hans Henny Jahnn admired the "size and wisdom of the diapason and the selection of voices". 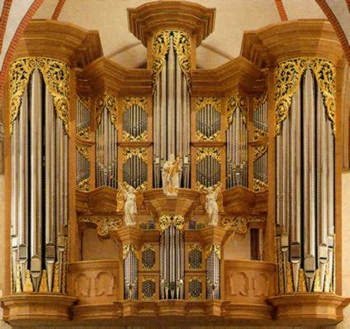