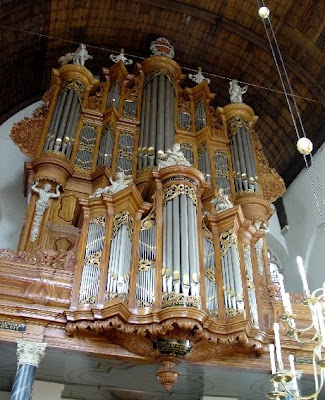 The organ in the Groote Kerk, at Maassluis was built by Rudolph Garrels (1675-1750) in the years 1730-1732. It was a gift of Govert van Wijn, a wealthy resident of Maassluis, owner and treasurer of the College of fisheries. On December 4th, 1732, the 90th birthday of Govert van Wijn, the transfer and inaugural concert took place. 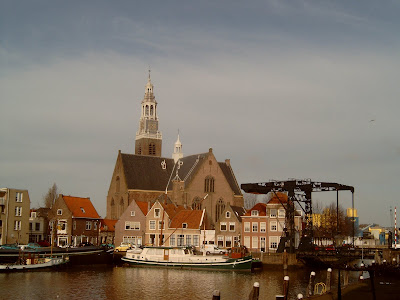 8 Short Preludes and Fugues Prelude and Fugue in C major

Prelude and Fugue in do major BWV 553

1. Ton Koopman at the Garrels organ of the Grote Kerk (Maassluis)
Equal Temperament. Pitch: a'=440 Hz.

Rudolph Garrels was born in the East Frisian place Norden. As an apprentice he had learned the trade from the renowned German organbuilder Arp Schnitger. Like so many students of this famous organ builder, Garrels also went across the border and settled in Groningen. From this city he built several instruments in the Schnitger tradition, and one still exists: the organ of Anloo (1718). Garrels then went to Holland and lived in Leiden and Den Haag.

In the later work of Rudolph Garrels we find a synthesis between the Dutch and German organ building. In particular, the three manual organ of Maassluis is a good example. Garrels had the sculpture and carving work on the organ done by the Maassluis cabinetmaker and sculptor, Daniel de Vries.

The structure of the nine-section facade of the great and the upper work reminds of the design of some Schnitger-organs, but is closer to the instruments of the Duyschot tradition. Characteristic is the vertical line, as opposed to the North German horizontal emphasis. This perspective is created by the large front pipes being placed in the central tower and the placement of the towers on both sides at a lower height. The beautiful wooden roof of the case, in a descending line on both sides, forms a connection between these three points.

Modern in the Maassluis façade is that the lower section of the case, is extended right under the pedal towers. These are just some elements that indicate a synthesis between the architecture of Schnitger and the shape and influences of the Dutch organ tradition of Hagerbeer - Duyschot. In the construction of the disposition we also find examples of this. Garrels placed on each manual a Trumpet 8 'while the bovenwerk received a Vox Humana 8' in combination with a Baarpijp 8' and a Quintadeen 8'. Also in the placing of a Cornet on the hoofdwerk Garrels is guided by examples from the Dutch school. 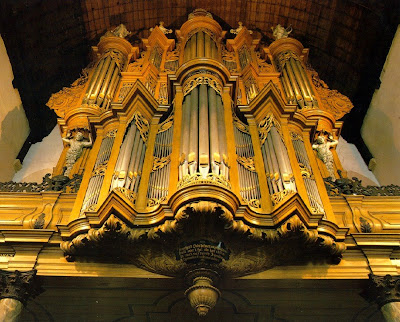 In the course of time the organ of Maassluis did not remain safe from varying musical tastes of organists and organ builders. More or less substantial alterations on the instrument were made by Jacobus Robbers (1772-1773), Andries Wolfferts (1789-1801), Abraham Meere (1805), Jonathan Batz (1840), Michael Maarschalkerweerd (1881) and two generations of van Leeuwen ( 1938-1965).

A first restoration, which tried to go back to the original state of 1732, took place in the years 1956 to 1965. Soon it became evident that the organ needed a thorough restoration. In 1975, the then sitting regents decided to commence a major restoration to proceed and restore the Garrels organ to its previous splendor and thus preserve it for posterity. The extensive plan received the full consent and cooperation of the National Monuments board. The contract was given to the organ makers Pels & Van Leeuwen. The government board’s advisor for organs, Drs. O. B. Wiersma, supervised the project in close cooperation with Dr. M.A. Vente and the organist of the Great Church, Feike Asma.

In the realization of the restoration plan, the respect for the work of Rudolph Garrels was pivotal. Despite that, return to the situation of 1732 was not possible. An important point of consideration was the state of the instrument in 1840, when Jonathan Batz for the first time in many years returned the organ to a playable state.

During the restoration, the entire wind facility was renewed. The windchests of the hoofdwerk, and the pedal and the rugwerk were as much as possible restored to their original form. The disappearance of the bovenwerk’s windchest was remedied by using old handcraft skills to reconstruct and install a new windchest. The entire register mechanics were replaced by new mechanical stops. Much of the historic pipe material was damaged in the course of time. This had to be repaired or newly built in the old style. The Open Subbas 16 '(1938) and Bazuin 32' (1975), which were both placed on a separate chest behind the organcase, were maintained. This allowed the organ, after the restoration of 1978, to have a broader base. 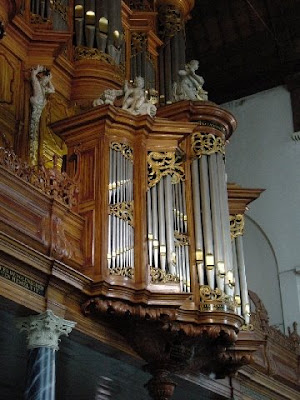 In 1996, various repairs became necessary. The large bellows in the tower began to exhibit various leaks and had to be re-leathered. At the restoration of 1978 this was not done. Also in the rugwerk there were leaks, which were audible in the church. The extensiveness of the renovation resulted in a request and approval of a grant by the National Monuments. The consultant, Rudi van Straten, suggested a number of matters that were not in 1978, addressed directly, to have these taken care of in the next major maintenance. Meetings followed between organ builder Pels & Van Leeuwen, the National organ advisor Henk Kooiker and organist Jaap Kroonenburg.

It is important to mention that all parties agree on the sound of the organ, it should remain unchanged.

In December 2000, the bellows are again re-leathered and the leakage in the rugwerk is addressed. These were the most urgent problems.

In October 2001 the pipes of the rugwerk were removed for inspection. Many pipes,being an alloy of lead and tin, were found to be affected by acids in the oak chests that occur naturally. Several pipe feet appeared to be affected and are sent for repair to the orgelmakerij of Pels & Van Leeuwen. The wind chests were found, after checking for leaks, to be in a very good condition. The key action is reviewed and adjusted, so that the key motion is as smooth as possible. In the first quarter of 2002, the hoofdwerk and the pedal are inspected.Some pipes were too short and somewhat pinched on top. These pipes have been extended so they can speak freely and better retain their pitch. Stops as Mixtuur of the bovenwerk and the Scherp of the hoofdwerk now blend better in the overall organ sound.The Cornet of the hoofdwerk has clearly improved and has become more useful as solo voice. The intonation of all stops is regulated and the wind supply is re-adjusted so that the organ now in a splendid condition. It remains a necessity to maintain regular maintenance to this over 270 year old gift from Govert van Wijn. To keep the organ in the best condition for playing during worship, and, given the stated conditions from Govert van Wijn, the church also needs to ensure that the organ's contribution to the organ culture in Maassluis and beyond, will continue. The organist is also obligated by his letter of appointment, to provide some organ concerts each year. There is an organ committee to ensure that such activities are organized. The proceeds will be contributed to the maintenance of the organ. And that is necessary, for maintenance, voicing and tuning, adjustments to the trackers etc. annually, substantial amounts are needed.

In this way, all efforts work together to maintain this magnificent instrument, which is widely appreciated for it’s beautiful sound and it’s many unique voices, and is capable of interpreting organ music of all periods. 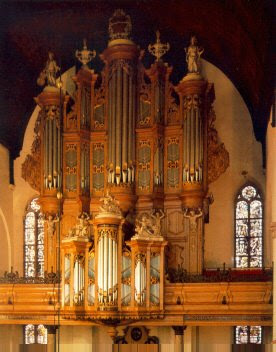