Höfkirche Gottfried Silbermann 1755 Organ of the Cathedral in Dresden 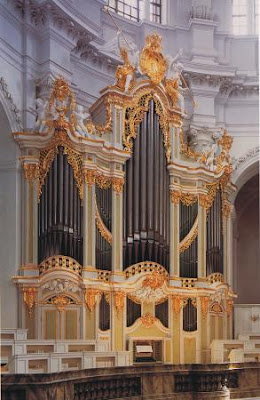 HISTORY
This organ has had an interesting history. From what I know, the organ was removed in 1944 due to the danger of bombings. There was a last organ concert in January, and the instrument was removed thereafter. When the instrument was taken out and moved to the cloister of St. Marienstern in Panschwitz-Kuckau, the case, bellows and framework has to remain in the church. Removal of the case was considered but not possible since the whole case was fixed into the stone wall.

During the bombing of Dresden in 1945, the church was considerably damaged by incendiary and explosive bombs. The missle nave vault and part of the outer walls collapsed. The church's interior was completely burnt out including all those parts of the organ which had been left behind.

The congregation of 12,000 shrank to 300. Of 3 formerly preserved Silbermann organs in Dresden, the evacuated parts of the Hofkirche organ turned out to be the only parts which escaped destruction.

Though trained as a carpenter, German master organ builder Gottfried Silbermann (1683-1753) felt the "inclination to organ building" from his teen years. From 1702 to 1707 he studied organ building in Strasbourg under his elder brother, Andreas. The elder Silbermann agreed to tutor his brother so long as he did not move in on his territory. Hence in 1710 Gottfried returned to Saxony where he established his reputation with an organ in Freiberg Cathedral. His contemporaries marveled at how his knowledge of acoustics and physics - and his skill in tuning and voicing the pipes - allowed him to create such a transparent and "silvery" sound. Silbermann lived in Saxony until his death. By that time he had constructed 46 organs, over 30 of which exist today. "These instruments are magnificent beyond measure," Mozart said after playing the Silbermann organ at Dresden's Höfkirche Roman Catholic Cathedral.


In 1947 it was decided to rebuild the organ, and in the following years the organ slowly took form in its original form and place. In 1963 the first part of the surviving organ returned to the Jehmlich firm shop for repairs They had only suffered water damage during their time in storage. Then in 1966 the pipework followed, and it had been preserved almost entirely with the exception of the Unda maris 8' stop, which was lost. Rebuilding and reconstruction went on until 1971. 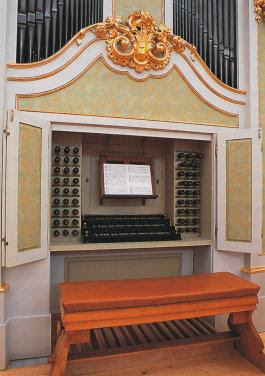 
When he's not working with modem porcelain pipes, Jehmlich is busy with the organs of Gottfried Silbermann, the 18th century master organ builder whose instruments were favored by the likes of Johann Sebastian Bach and Wolfgang Amadeus Mozart.

Jehmlich's family has been repairing and restoring Silbermann's work since 1836. In contrast to the more robust-sounding organs built in northern Germany, organs constructed by Silbermann are marked by their rich overtones, silvery flutes and reedy trombones. To achieve such distinctive features requires skillful hands, eyes and ears as the builder individually shapes each of the sometimes thousands of pipes in the instrument. Organ builders meticulously cut and bend the lips of each pipe in order to achieve distinctive tones and timbres. Especially important are the dimensions of the slots near the top of the pipes; these slots determine the way the air flows through the pipes, which in turn determines the quality of the registers. Jehmlich's immediate focus is the partial restoration of Dresden's Silbermann organ, which was largely destroyed during the Allied fire bombing of the city in February 1945. Jehmlich's work includes the repair of existing parts, the lengthening of the pipes to reach pitch and the construction of a replica of the bellows that perished in the flames. "We put high priority on preserving substance," Jehmlich says. "This sometimes means that we bring historical working methods back to life." 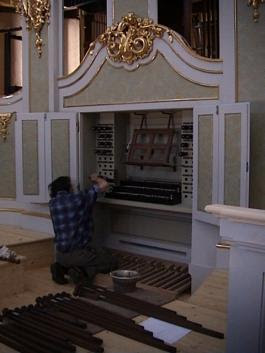