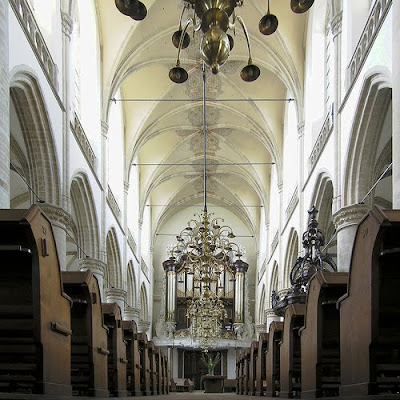 Even in the Middle Ages the church had an organ. This is confirmed in financial accounts from 1490 which show payments to an organist. It was not so much organ music to which the church council objected, but rather some “light hearted” playing. This was probably due to the organists who, now and again, played non-religious pieces.

When the pulpit was moved to the nave in 1597, the first organ was also moved to the southern transept, approximately opposite its original position.

In 1614 the organ builder Aelbert Kiespenning of Nijmegen was contracted to build a new organ that would be located on the east wall of the southern transept. This organ was approved by the famous organist Jan Pietersz. Sweelink of Ansterdam.

A lead singer was appointed in 1611 to support congregational singing. Organ music was banned temporarily from church services but after 1638 the singing of psalms was once again accompanied by the sounds of the organ. The organ once again regained its rightful place in services, but technically no longer met requirements. In 1671 the organ builder Nicolaas van Hagen received a contract to build a new instrument. In spite of protests from the Guilds that the money could be better spent, he made preparations in his home town of Antwerp and commenced the project.


Lack of money and the war against France caused progress to be slow. By 1674 the work was only half completed. However, to have stopped at that point would have been a senseless waste of money. The only alternative was to borrow more money and in 1675 Nicolaas van Hagen was again fully employed on this work. After that date his name is no longer mentioned in historic documents. Carel Jacobsz. Pellereyn, organ builder of Dordrecht, finally completed the building of that organ. 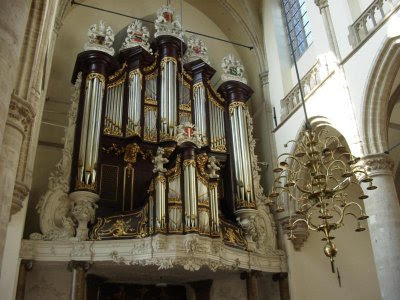 In 1762 the organ casing was fitted with new carvings in rococo style, with the exception of the Arms. The carving and Arms were painted white and the oakwood organ casing received a mahogany colouring. In this way the organ formed a unity with the nave.

About 1855, however, the organ had fallen into such disrepair that it was decided to build another organ, to be placed in the existing casing. The new organ, now located at the north western end of the building, was built by the organ builder Kam of Rotterdam and was inaugurated by the then current Minster organist, Gijsbert Izaäk de Vries.

Except for some minor changes, the current organ still has its original specification.


Everhard Zwart plays "Toccata in D" from R.L. Becker
on the Kam-organ of the Grote Kerk at Dordrecht (Holland).

Opening part (Grands Jeux) from Jean Langlais' Suite Brève (1947)
performed by Margreeth de Jong on the 1859 Kam-organ
of the Grote Kerk in Dordrecht (The ).


The Bells of Dordrecht Cathedral, .
On Friday September 26th the Change Ringing Peal in Dordrecht was officially opened. After a full day of concerts and demonstrations the Saturday after our Carilloneur Boudewijn Zwart, never without energy, invited all the English ringers in the tower for a ring on the big bells. He also took them to the carillon and improvised on God save the Queen. It was impressive for all of us!!