After the extraordinary undertaking the restoration of the church of San Dominic and its reopening to the church, the Committee St. Domenico, led by the pastor of the church, Monsignor Luigi Hinny, has decided to equip the great basilica with an organ as prestigious as that which accompanied in the past.

The Church of San Domenico: The dark years: the ruins of St. Dominic.

In 1810 the French government seizes the entire complex, ousting the religious who are to leave the convent. In 1862 The religious community is suppressed and the new structure receives ownership of land. The convent is used as a military barracks while the church is used as a stable. Don Mariano Pandolf draws up, in those years a timely and heartfelt chronicle of the vicissitudes suffered by the church, later taken over by his nephew Don Vincent Woods. From its chronicles how the church was reduced at the mercy of everyone: the reed organ, famous because of special twisted pipes, is disassembled by the boys who played in the street as fifes. Fourteen altars are all destroyed, stolen marble, the library sacked, bells sold to a stranger claiming to recast.

From 1924 to 1940 the church was used as a sawmill. In 1966 Dr Luisa Mortari, director of the Museo Civico di Rieti, performs a partial restoration and the posting of the few paintings remaining today kept partly in the Museum and the Diocesan Museum. In 1979, due to the earthquake and neglect, the roof collapsed and the building is overgrown.


Improvisation on the theme of "La Majesta" by Telemann.
Performed on the monumental organ Formentelli Sun-Bedos the Church of San Domenico in Rieti. The trumpets are placed on an Chamade wrestplank left to right in during the recording because of the place of the recovery came sharp and clear just sounds right.

On 8 June 1994 the Municipality of Rieti, who had San Dominic, entrusted it to Bishop Luigi Bardotti, pastor of Saint Lucia, for return to worship. The church is in complete state of abandonment, but Don Louis did not lose heart and starts the Committee for the recovery of the building. Within a short time work starts: it reconstructed roof trusses wood beams and cleaned the walls, the floors redone  brickwork and relocated five new bells. At last On December 18 1999 the church of San Domenico is reopened for worship and becomes part of the churches of the great Jubilee of the third millennium.

The meeting with Bartholomew Formentelli: why the organ of St. Dominic is called Dom Bedos -Roubo

The idea of building a Dom Bedos Organ dates from April 2000, when some members of the Committee, participating in the blessing of the largest organ of the Jubilee in Santa Maria degli Angeli in Rome, know the craftsman of the instrument, Bartholomew Formentelli, organ builder in Pedemonte Verona.


Formentelli has a reputation for exquisite work, following the ancient rules of the organ art. He brought back new life to the great (1735) Moucherel organ in Albi. Formentelli builds and restores getting impressive, warm and atavism sounds. At an encounter with the organ builder the idea was born or make an organ by following the directions of two treaties of the eighteenth century:

explicated in detail the entire process of building an organ,starting from its construction up to the choice of construction materials,

In the Dom Bedos each step is meticulously described, by merging pipes up to the rules of maintenance and choice of stops during execution. This is a rigorous publication of reference for builders.


"L'Art du Menuisier Carrosier" Monsieur Roubo Le Fils, dating back to 1768, is a treatise on carpentry and sculpture wood on which it based the design of the "dress" external case which plays the aesthetic role, but also has a key role in the sound quality, as is the case for any musical instrument.


On 15 January 2004 the contract was signed  between the organ-building workshop for Bartholomew Formentelli and the committee San Domenico. Immediately after the commencement of work that can be said to be essentially complete with inauguration given on 8 December 2008 by SE Cardinal Tarcisio Bertone, Vatican secretary of state. The organ was completed in all its registers in November 2009.


Great French Offertory  on a Theme by Delalande. Performed on the monumental Formentelli organ of the Church of San Domenico in Rieti.  the organ is still under construction, is not complete with all the registers and the tuning is not definitive. the organ looks great, it is bright in sound, vigorous in the reeds, warm in foundations and brilliant as a starry sky in ripieni. the mechanics are elegant and precise. A real round of applause to the Master organ builder Formentelli who has built a real piece of history! God bless this work. Formentelli put this in vivo Dom Bedos had only dreamed of. 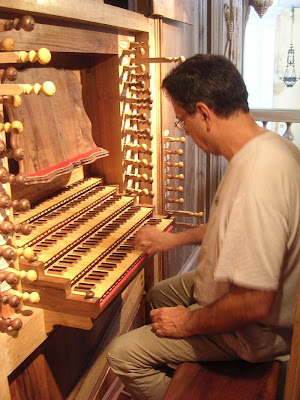 It's a classic French organ, with five keyboards and pedal 30 keys, It has 57 registers and 4054 pipes, It has a console that matches the great historical organs of France and Northern Europe. The  "French" pedal of the Dom Bedos-Roubo, was conceived according to the French music of the eighteenth century and therefore ill-suited to perform music or nineteenth polyphonic pieces on the pedal. For this reason, it was considered necessary to provide the Dom Bedos-Roubo with with a "German" second pedal, it undoubtedly extends the musical literature executable. The two pedals are interchangeable depending on the music you will have to perform.


The monumental walnut case (13.5 meters) is waxed and decorated with wooden carvings depicting flowers and cherubs, by Sergio dall'intagliatore Bellani.

Some reed pipes are placed horizontally (En Chamade), typical of the southern tradition of France and Spain. In the facade the register Montre 32 foot dominates. The pipes are tin  (Montre, Plein Jeux and Ance 35%) and lead, hammered and planed by hand. The reeds are made of brass reeds "laiton Graitè" (hammered obtained more layers) according to the age-old practice of France and Europe

The GRAND'ORGUE (II clavier Montre de 32') of the large organ is based on a 32 foot. The console is behind the Positive Tergal. In Europe there are only two other "brother" organs to Rieti with five keyboards with the third "En Chamade" the Moucherel organ of Albi and the Dom Bedos organ of Bordeaux.

The choice of temperament and 'was a compromise must be compared to
medium tone desired by Dom Bedos. It would limit very much
music performed. Therefore, after consultations with the Maestro and Colamarino
Hadrien Jourdan, Formentelli proposed and implemented a temperament
Inequities, at 415 with just four major thirds (do-mi, fa-la, I resolved
; Re-fa #). Even the literature of J.S. Bach is executable. Some agreements
(B major and C # major) have the effect of "fifth of the wolf."

1) Socket: contains 2 of the 4 bellows el'elettroventilatore.
2) Singer: It is accessible from behind the organ by means of a scale that
"The guillotine" because it measures the scale of the scaffold. Ironic
metaphor for the Organ, going up the "guillotine", is preparing to undergo the opinion of the public. 5 keyboards (console) are placed between the Tergal positive and the great organ and are not visible from the nave.
3) Positive Tergal is inserted into a wooden railing and in itself capable of playing alone or together throughout the instrument, it is' triggered from the keyboard.
4) Great Organ: Beyond the Great Organ (II keyboard), this part also contains the pedal placed in the two side towers and Recitative (IV keyboard). Inside the base are two bellows with their electric
5) Echo Organ, operated by the fifth console keyboard. Located behind the Positive Tergal that prevents the public to see the organist
6) side towers, are the pipes of the pedal, that are driven by pedals
7) the main tower where the pipes are bigger. The central tower, corresponding to "LA", is about 7 meters high.
8) Console, hidden by Positive Tergal, has 5 keyboards, 57 registers.
Pedalboard "French" interchangeably with "German".
9) Organ of recitative, hidden in the central tower, is driven from the IV keyboard in the console: the echo, using his right hand to perform singable or actual response