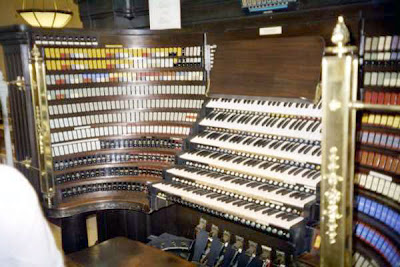 In its present configuration, the Wanamaker Organ has 28,482 pipes in 461 ranks.[2] The organ console consists of six manuals with an array of stops and controls that command the organ. The organ's String Division forms the largest single organ chamber in the world. The instrument features eighty-eight ranks of string pipes built by the W.W. Kimball Company of Chicago.[2] The organ is famed for its orchestra-like sound, coming from pipes that are voiced softer than usual, allowing an unusually rich build-up because of the massing of pipe-tone families. The artistic obligation entailed by the creation of this instrument has always been honored, with two curators employed in its constant and scrupulous care. The organ, with its regular program of concerts and recitals, was maintained by Wanamaker's throughout the chain's history, even as the company's financial fortunes waxed and waned. This level of dedication was maintained when corporate parentage shifted from the Wanamaker family to Carter-Hawley-Hale Stores to Woodward & Lothrop to Lord & Taylor to Macy's.

LISTEN TO THE ORGAN:


Music played in the above program

MARCEL DUPRÉ: The World Awaiting the Savior, from Symphonie-Passion, Op. 23

The Wanamaker Grand Court Organ, in Philadelphia, Pennsylvania, is the largest operational[1] pipe organ in the world, located within a spacious 7-story court at Macys Center City (formerly Wanamaker's department store). The largest organ is the Boardwalk Hall Auditorium Organ (which is barely functional). The Wanamaker organ is played twice a day, Monday through Saturday, and more frequently during the Christmas season. The organ is also featured at several special concerts held throughout the year, including events featuring the Friends of the Wanamaker Organ Festival Chorus and Brass Ensemble.

The Wanamaker Organ was originally built by the Los Angeles Art Organ Company, successors to the Murray M. Harris Organ Co., for the 1904 St. Louis World's Fair. It was designed to be the largest organ in the world, an imitation of a full-size orchestra with particularly complete resources of full organ tone including mixtures. In addition to its console, the organ was originally equipped with an automatic player that used punched rolls of paper, according to the Los Angeles Times of 1904.[3] It was designed by renowned organ theorist and architect George Ashdown Audsley.

Wild cost overruns plagued the project, with the result that Harris was ousted from his own company. With capital from stockholder Eben Smith, it was reorganized as the Los Angeles Art Organ Company, and finished at a cost of $105,000, $40,000 over budget. The Fair began (in late April, 1904) before the organ was fully installed in its temporary home, Festival Hall. It still was not entirely finished in September of that year, when Alexandre Guilmant, one of the most famous organists of the day, presented 40 very well-attended recitals on the organ.

Following the Fair, the organ was intended for permanent installation by the Kansas City Convention Hall. Indeed, the original console had a prominent "K C" on its music rack. This venture failed, bankrupting the L. A. Art Organ company after the Fair closed. There was a plan to exhibit the organ at Coney Island in New York City, but nothing came of this. The organ remained in its original home, the 1904 World's Fair.

The organ languished in storage at the Handlan warehouse in St. Louis until 1909, when it was bought by John Wanamaker for his new department store at 13th and Market Streets in Center City, Philadelphia. It took thirteen freight cars to move it to its new home, and two years for installation. It was first played on June 6, 1911, at the exact moment when British King George V was crowned. It was also featured later that year when U.S. President William Howard Taft dedicated the store.

Despite its then-unprecedented size (more than 10,000 pipes), it was judged inadequate to fill the seven-story Grand Court in which it was located, so Wanamaker's opened a private organ factory in the store attic, which was charged with enlarging the organ. The first project to enlarge the organ was the addition of 8,000 pipes between 1911 and 1917.

Wanamaker's sponsored many historic after-business-hours concerts on the Wanamaker Organ. The first, in 1919, featured Leopold Stokowski and the Philadelphia Orchestra with organist Charles M. Courboin.[2] Every sales counter and fixture was removed for the free after-hours event, which attracted an audience of 15,000 from across the United States. Subsequently more of these "Musicians' Assemblies" were held, as were private recitals. For these events Wanamaker's opened a Concert Bureau under Alexander Russell and brought to America master organists Marcel Dupré and Louis Vierne, Nadia Boulanger, Marco Enrico Bossi, Alfred Hollins, and several others. (This agency, which worked in partnership with Canadian Bernard R. LaBerge, evolved into the Karen McFarlane Concert Agency of the present day.)

During his first recital on the organ, Dupré was so impressed with the instrument that he was inspired to improvise a musical depiction of the life of Jesus Christ. This was later published as his Symphonie-Passion.

In 1924, a new project to enlarge the organ began. Marcel Dupré and Charles M. Courboin were asked by Rodman Wanamaker, John Wanamaker's son, to "Work together to draw up a plan for the instrument. Use everything you have ever dreamed about." They were told there was no limit to the budget.

This project resulted in, among other things, the celebrated String Division, which occupies the largest organ chamber ever constructed, 67 feet long, 26 feet deep, and 16 feet high. During this project, the organ's current console was constructed in Wanamaker's private in-house pipe-organ factory, with six manuals and several hundred controls.

By 1930, when work on expanding the organ finally stopped, the organ had 28,482 pipes, and, if Rodman Wanamaker had not died in 1928, the organ would probably be even bigger.[4]

Plans were made for, among others, a Stentor division, a section of high-pressure diapasons and reeds. It was to be installed on the fifth floor, above the String Division, and would be playable from the sixth manual. However, it was never funded, and the sixth manual is now used to couple other divisions or play various solo voices from other divisions that are duplexed to this keyboard. [5]

Rodman Wanamaker was not interested in mere size, however, but in artistic organbuilding with finely crafted pipes and chests using the best materials and careful artisic consideration. The Wanamaker Organ console, built in the store organ shop by William Boone Fleming, is a work of art in its own right with heavy, durable construction, an ingenious layout of its pneumatic stop action and many unique features and conveniences.

Wanamaker also had a collection of 60 rare stringed instruments, the Wanamaker Cappella, that were used in conjunction with the store organs in Philadelphia and New York, and went on tour. They were dispersed after his death.

Following the sale of the store to the May Department Stores Co., in 1995, the Wanamaker's name was removed from the store (first as Wanamaker-Hecht's) in favor of Hecht's, but the organ and its concerts were retained. During the local re-naming of the Hecht's stores to Strawbridge's, the historic Wanamaker Store briefly took the name of its longtime rival Strawbridge's. The May Company began a complete restoration of the organ in 1997, as part of the store's final May Co. conversion into a Lord & Taylor. At that time the store area was reduced to three floors and additional panes of glass were put around the Grand Court on floors four and five, greatly enhancing the reverberation of the room.

The Philadelphia Orchestra returned to the Grand Court on September 27, 2008 for the premiere performance of Joseph Jongen's Symphonie Concertante (1926) on the organ for which it was written. The ticketed event, featuring soloist Peter Richard Conte, also includes the Bach/Stokowski arrangement of the Toccata and Fugue in D Minor, Marcel Dupré's Cortege and Litany for Organ and Orchestra, and the world premiere of a Fanfare by Howard Shore, composer for the Lord of the Rings films. Shore visited the store in May 2008 to meet with Peter Richard Conte and hear the Wanamaker Organ. The Philadelphia Orchestra Concert was co-sponsored by the Friends of the Wanamaker Organ and was a benefit for that organization.[6]

Architectural layout
A view of the string division.

The pipes are laid out across five floors, with the sections situated as follows:

The 32′ Wood Open, 32′ Diaphone, and 32′ Metal Diapason pipes run the length of a little more than 2 stories, beginning on the second floor.[2]