Klosterneuburg is the 26th district of Vienna. The abbey is a Roman Catholic Augustinian monastery established on a hill rising directly from the banks of the Danube. An abbey, in the German-speaking world, is frequently called a Stift because often its foundation was made possible by a generous benefactor.

It was founded in 1114 (first documented mention 1108) by Saint Leopold III, Margrave of Austria and his wife, Agnes. Leopold was a Babenberger and is the patron saint of Austria. The abbey was given over, in 1133, to the Augustinian Canons. The donation included impressive buildings on vast area, comprising the abbey facilities and the collegiate Romanesque church (3-aisled, transept with regular crossing), built between 1114-36.

The towers were built in 1394 and 1638 respectively. Jakob Prandtauer drew the plans for a Baroque enlargement of the abbey in 1706. In 1730, Donato Felice d'Allio began to draw his plan for a new building, significantly influenced by Joseph Emmanuel Fischer von Erlach, commissioned by Emperor Karl VI, who wanted to make Klosterneuburg his official residence ("Austrian Escorial"). In 1776, this plan had to be simplified by D. Kaselikand, between 1836-1842, J. Kornhäusl carried out the first quarter of the plan, the rest was not realised.

The decorations and furnishings in their present Early Baroque form date from the 17th and 18th centuries and are due to transformation of aisles into chapels, the building of a western gallery and stucco work, High Baroque frescoes by Johann Michael Rottmayr and stuccoes by Santino Bussi (1680-1723).

The exterior was extensively restored by Frederich von Schmidt, in the 19th century (Neo-Gothic western towers, 1887-92). Other additions include the Freisinger or Wehinger chapel (1394, restored 1869-1881); auxiliary altars (from 1700 with paintings by Paul Strudel and sculptures by the Spät brothers); remarkable choir stalls by Matthias Steinl (1723); the high altar (1728); the Leopold chapel (former chapter hall with Gothic windows dating from 13th and 15th centuries), adaptated between 1677-1680 which contains the famous Verdun altar (Margrave Leopold's tomb), a marvellous winged altarpiece made from enamel panels by Nikolaus von Verdun (1181), in 1331 transformed into a winged altarpiece with painted panels. 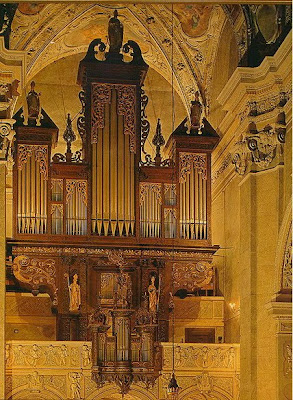 
The organ in Klosterneuburg is from the 17th century. It was built between 1636 and 1642 by the young organ builder Johannes Freundt, from Passau. The organ was exclusively installed for solistic organ playing on high feasts.

Over the next centuries, adaptations took place several times, but fortunately these were only minor. A complete restoration was planned for 1942 but the war made it impossible. The action was moved to Vienna to be repaired, but was destroyed in a bombing attack.

After the war, the political situation made it very difficult to restore the organ to its original glory. It wasn’t until 1983 and 1990 that a complete restoration according to historical principles could be performed by the Kuhn company (Männedorf, Switzerland) that brought back this unique piece of art to its original conditions.

It is one of the finest Baroque organs in Europe. 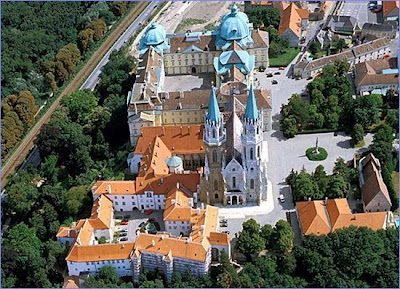