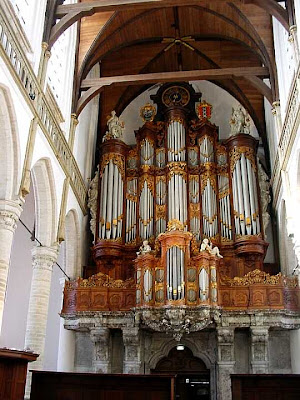 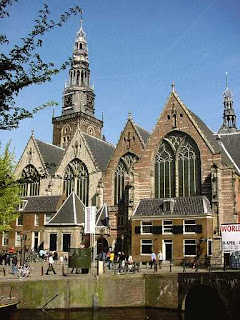 The organ and Sweelinck, a famous 16th century organist on this organ.

The Old Church has a long tradition of having excellent organs and organists. Even during the fifteenth century, an organ was hanging on the west wall (tower wall) of the nave. In 1539, the church acquired a new instrument that was played between 1577 and 1621 by a famous organist by the name of Jan Pieterszoon Sweelinck.
The transept organ, restored to its seventeenth-century composition in 1965, was recently regiven a mean tone temperament, making it one of the best instruments imaginable, to perform the organ music of the Amsterdam 'Orpheus'. 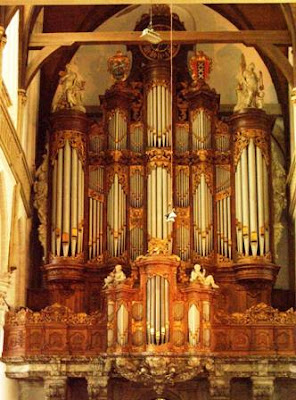 The great organ
The large organ is constructed by Christiaan Vater (1724-1726) of Hannover and is restored by Johan Caspar Muller (the St Bavo-church in the city of Haarlem, NH). Shortly after the completion of the organ the church-tower began to sink (1738-1742). The entire organ needed to be dismantled, and Caspar Muller was chosen to rebuild the organ and to add nine new stops and to double the principals in the treble. In 1869-1870 the organ was revoiced to conform to contemporary taste by C.F.G. Witte
On the original organ (built in 1539 by Hans van Coelen and Hendrick Niehoff) Jan Pieterszoon Sweelinck (1562-1621) made his first musical compositions.
In 1724, the church wardens of the Old Church commissioned Christian Vater, the Hamburg organ builder, to build an entirely new organ to replace the old one. Vater completed this organ in 1726 and the churchwardens were very pleased: the instrument was “absolutely perfect in every way”. In 1738, the tower began to subside. For restoration activities, the organ had to be dismantled. Once the tower had been restored, Caspar Müller was commissioned to re-install the organ. Not only did Müller put it back, but he made major changes as well, his belief being that after its renovation, the organ ‘should speak promptly and forcefully and should be heard during the singing’. The Vater-Müller organ would remain largely unchanged until 1869 when G.F.H. Witte updated it to accommodate contemporary tastes requiring a sound that was less sharp and more rounded. Although Witte changed the sound, hardly a piece of the original material was lost. Since Witte’s renovation, the organ has remained unchanged.

Feike Asma plays a toccata on by J. Zwart on the organ of the oude kerk in Amsterdam 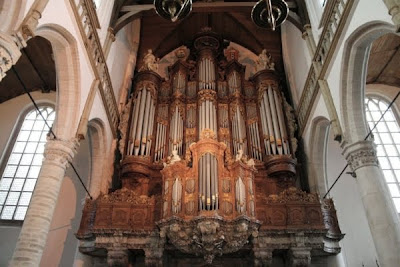 The Old Church Organ has always been admired. It was once mentioned in the famous 18th-century travelogue written by Charles Burney. Even today, it attracts organ enthusiasts – both listeners and players – from all over the world.

The case for the organ was designed by Jurriaan Westerman. Above the organ are the old city seal of Amsterdam with the cargo ship and the city’s coat of arms with the three Andreas crosses. 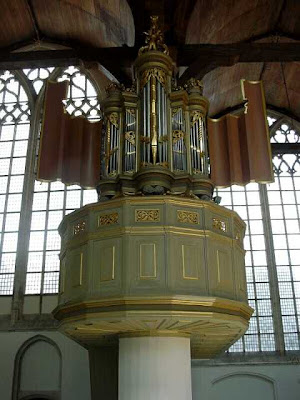 The small (or transept) organ
This organ was built in 1658 by the famous organ maker Hans Wolff Schonat. In building it, he used some of the pipes taken from another organ at this location that had been built by Hendrik Niehoff. 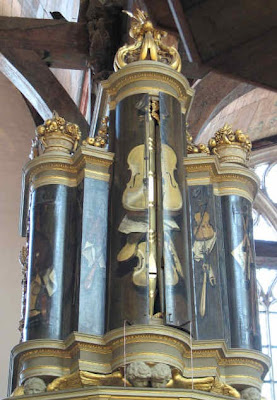 The small or transept organ of the Oude Kerk in Amsterdam has two blinds with paintings representing musical instruments. These paintings are made by Cornelis Brizé and were completed in 1658 at the time the original organ was ready. 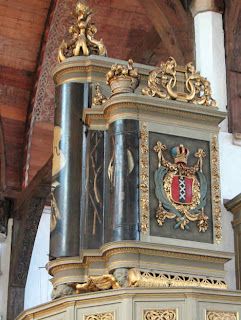 
The instrument was used for concerts commissioned by the city’s administration. During the 18th century, it was used less and less frequently so that when an organ had to be built for the Zuiderkerk in 1821, the pipes from the small organ in the Old Church were used. The case, however, remained behind. In 1964 and 1965, a new organ was built for the old organ case by organ makers Ahrend & Brunzema from the East Friesian town of Loga near Leer. Its disposition was taken from the famous collection of dispositions of Joachim Hess, an organist from Gouda, and dates from 1774. It has become a beautiful instrument with great artistic eloquence and was even enlarged after being retuned in 2001 to a 17th-century mean-tone tuning. 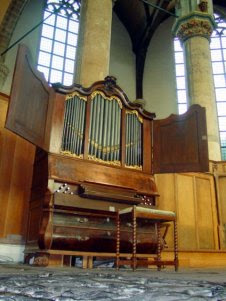 The cabinet organ was built in 1767 by Amsterdam organ maker Deetlef Onderhorst, supposedly for a private client. In 1946, the organ was repaired by organ builder A. Blik who also replaced its manual wind chest with an electronic system. In 1977, the organ was completely restored by Adema's Kerkorgelbouw. The restoration included having the cabinet restored and completed and removing the white coat of paint that had been added in 1953.


After its most recent restoration, the organ was installed in the choir of the Old Church.

Chaconne in F from the 9th Suite "Uranie" by Johann Caspar Ferdinand Fischer at the choir organ of the Oude Kerk (Amsterdam, NL) 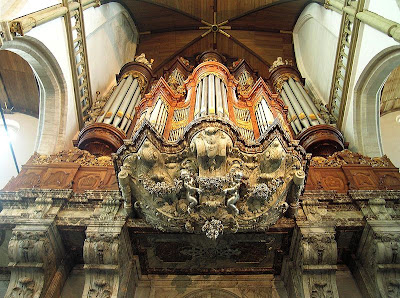