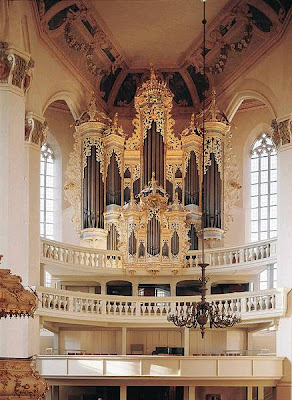 
The history of the instrument


There is no doubt that the Hildebrandt Organ in St. Wenzel belongs to the most significant creations of late baroque organ building. It exceeds all Silbermann organs not only in number of stops but also in variety. The specification shows conservative elements with deep roots in German baroque organ building and also aspects matching the new sound sensibilities which developed in the 18 th century, with French characteristics in the background. Thus this unique work has come into being from the universality of Bach`s spirit, from the cosmic multiplicity of his work, and likewise it unifies traditional achievements and foreshadows future developments in a brilliant synthesis.


History of the Hildebrandt organ in Naumburg


On the 27th of August 1743, the Naumburg City Council entered into a contract with Zacharias Hildebrandt of Leipzig for the building of the new organ of 52 stops in the existing case of the organ by Zacharias Thayssner (built 1696 -1705). Previously a report from J. S. Bach about the organ had been obtained which was "most kindly found acceptable". Thus we can surely assume that Bach had an influential role in the drawing up of the specification, and that this instrument corresponded to his idea of a fine large organ. On the 27th of September 1746 J. S. Bach and Gottfried Silbermann examined the finished organ and certified that Hildebrandt's work was good. In 1748 Joh. Chr Altnikol, Bach's son-in-law, became organist of the Hildebrandt organ.


In 1834 some small changes to the specification in the taste of that time were made by Friedrich Beyer, a local organ builder. In 1864 Friedrich Ladegast of Weissenfels overhauled the organ and also changed the specification. In 1917 Oskar Ladegast removed the windchests of the Oberwerk and replaced these with cone-chests. In 1932/33 the organ was extensively rebuilt by the Walcker firm (Ludwigsburg). The mechanical action remaining until then was removed and replaced by electropneumatic action, and an electrical console installed on the first gallery. The specification was nominally restored to that of 1746 following the advice of Christhard Mahrenholz.

In 1964, the Eule firm of Bautzen made the sound closer to that of the Hildebrandt original. In 1992 an international symposium took place on the past, present and future of the Hildebrandt organ. The unanimous vote for uncompromising restoration of the organ opened the way to restoration and reconstruction work from 1993 to 2000, again carried out by Hermann-Eule-Organbuilding of Bautzen. The work included: key action, stop mechanism, winding, pipe work, pitch, tuning, case, structural framework, carving, and colouring. Brunhilde Engelhardt says:
"My favorite organ I have ever played was the Wenzel in Naumburg in East Germany. This organ was built by Zacharias Hildebrandt, and actually Bach and the organ builder Gottfried Silbermann (who built many famous organs in Saxony) examined it together in September 1746 and gave their final approval to this instrument. What an unforgettable experience to play this instrument and to know that its colors of sound are as close as it gets to Johann Sebastian Bach's ideas himself!" The 1746 Hildebrandt Organ in St. Wenzel’s Church in Naumburg, Germany; is arguably the best extant example of a “true Bach organ.” 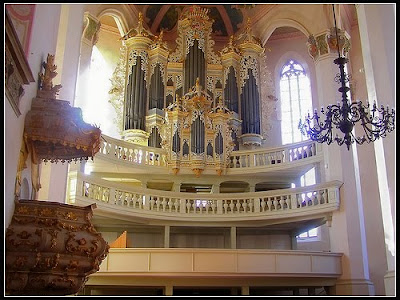 a work for organ by J S Bach. Composed in 1708, the whole work has a rather quaint, quieter sound and quite unlike his consuming larger, more volcanic works. 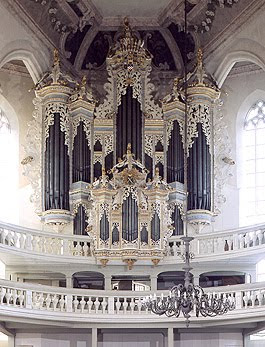