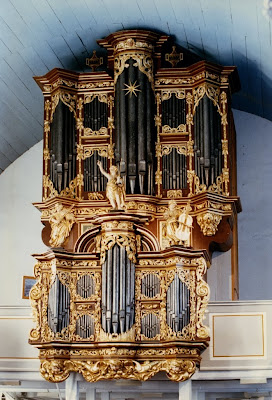 The Arp Schnitger organ standing today in the St.Peter-und-Paul-Kirche of Cappel - a little village east of the river Weser estuary - had initially been built in 1680 for the Dominican monastery St.Johannis in Hamburg which no longer exists. It replaced an instrument there dating from 1567 with a high rate of certitude, from which Arp Schnitger adopted a number of late renaissance stops. Unfortunately no records were kept in the Hamburg State Archive about this occurence. But sitting above the console an inscription in golden letters has been preserved, stating that the organ was built by Arp Schnitger "from April until December 1680".

It was the first work of the organ maker in Hamburg. There is evidence that in 1688 Schnitger carried out some smaller works perfecting the instrument, yet no documentation has been passed down to this day. A document by Schnitger's first biographer, the Dutch organist Siwert Meijer, quotes that Schnitger "in 1679 made a new opus for the St.Johannis church in Hamburg with 30 voices, two keyboards and an independent pedal". Further sources mention six bellows for the wind supply.

The organ had endured the 18th century without any changes or damage. During the French occupation of Hamburg (1806 - 1814) by Napoleon's troops the church served to store buffer stock and was never used for religious services anymore. The organ probably mainly survived since it was dismantled in 1813 by the Hamburg organ builder Geycke and stored in a monastery room adjacent to the church.

In December 1810 the church in Cappel and a fairly new organ built by Georg Wilhelm Wilhelmy in 1800 burnt down completely, leaving the parish for about six years without an instrument. It was thus a welcome coincidence that the Schnitger opus from St. Johannis was offered to them for 2000 Reichs-Talers as initial price. A ship transport for the parts from Hamburg to Cuxhaven was arranged, the rest of the route to Cappel with horse and cart. In the course of 1816 Wilhelmy re-erected the organ within slightly more than four months; it was played first on Christmas Eve the same year. He was paid 385 Reichs-Taler in gold currency. The parish decided to spend an additional amount of 15 Reichs-Talers for a Zimbelstern with "harmonically tuned bells". The statues on top of the organ were removed to enable it to fit on the organ loft. These statues are now above the altar at the front of the church.


Since the beginning of the 17th century not only rich Hanse cities like Hamburg had good sounding and magnificently equipped organs, it was not unusual even on the countryside to install them in comparatively small churches. Yet it presumably took a while for the Cappel parish councel to fully recognize what a gem they had acquired, the more so as Schnitger's name had not been mentioned in the sales contract.

In 1846 the same organ builder carried out some minor repair works but introduced no changes beyond that. Due to the remoteness of Cappel village the organ remained unaffected for 100-years; it prevented it from any adaption to the prevailing taste of the 19th and 20th century. When during the organ renovation movement the instrument's high merit became realized it was restored 1939 in several steps by Paul Ott, Goettingen, followed in the years 1976/77 by comprehensive overhaul works which Beckerath organ workshop carried out. The company reworked the Zimbel III to the Hauptwerk manual and the Cornet 2 in the Pedal, all other stops remained unaltered. Organ case, Principal (tin) pipes of the facade, manuals and wind chests were designed and built by Schnitger.
Above text and translation by Dieter Thomsen 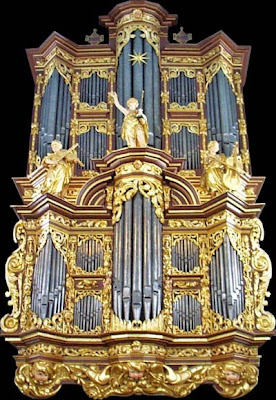 The following passage is an exact copy of the text by Helmut Walcha, as found on the DGG LP's.

"Of all the organs still in existence, which have come out of the workshop of Arp Schnitger, the grand master of German organ construction (born 1641 in Golzwarden near Oldenburg, died 1719 In Hamburg, the one in Cappel is the best preserved and the most valuable. Every visitor who enters the small village church of Cappel is surprised to find here such an ornate baroque work of art.

The exterior of the organ, which is richly carved, is painted white and green and is decorated with gild statues. The impression of great preciousness is further emphasized by the contrast with the church itself, which is designedly simple, and which has a pale blue barrelvault painted with stars. But the visitor will be still more astonished when he listens to this instrument, with its incomparable freshness and crystal-clear transparency, which can reproduce the polyphonic achievements of the old composers of organ works in a most impressive manner.

The explanation for this is given by the history of the organ. The Instrument was built in 1695 (or 1618?) for the church of the St. Johannis monastery in Hamburg. In contrast to many of the known Schnitger-organs, which were largely reconstructions of organs then in existence, or on which he worked as a journeyman, as in St. Cosmae Stade, this organ has been built specially by the master. Merely some particularly wide ranks of pipes, such as the chimney flute 8', the nason flute 3' or the gemshorn 2', were taken from an older instrument, probably from one made by a member of the Scheerer family of organ builders.

During Napoleon's occupation, the Church of the St. Johannis monastery was used as a store shed. The organ had to go and was sold in 1816 to the people of Cappel, whose church was burnt down in 1806 end had in the meantime been rebuilt, but who, much to their regret, could not afford a new organ.

It is due to these circumstances that the organ did not perish in the great fires of Hamburg in 1842 and 1943. For over 100 years the organ lived an uneventful life in Cappel. The modest resources of the church made it fortunately impossible to execute any but the most urgently necessary repairs, so that the organ was preserved from all reconstructions or improvements in the taste of the turn of he century - which means from serious interference with its original character. In consequence of this we have here a monument of the period of Schnitgers greatest achievements, which has come down to us unaltered and represents an inestimable value.

There is a conspicuous wealth of mixture stops, of which the pedal board has two, and the great organ and chair organ (the small choir organ at the back of the player) have three each (rauschflute, mixture, scharff, cymbel, sesquialtera, tierce). There cannot be many historical organs still in existence which have all mixed stops preserved in their original form, in this case from the hand of Schnitger.

Particularly beautiful are the principals, which with all their velvety smoothness have a tone of such vigorous pungency as will rarely be found elsewhere. The entire pipe work is free from signs of later interference with its intonation. This fact allows the conclusion that in this organ from Cappel we have preserved for us the genuine ideal diapason of the most flourishing period of classical organ construction.


The organ is still tuned in the choir pitch of the baroque period (which is half a pitch sharp compared with the present day standard pitch). To retune the organ would upset the whole tonal structure and would be quite insupportable. The fact that the tracker mechanism gives rise to certain small noises is only to be expected considering the age of this venerable instrument."


Text from the CD of Egbert Ennulat
In 1678, Schnitger set out as an independent organ builder, and his first extant instrument (1680) was the organ for the church of the Benedictine monastery St. Johannis in Hamburg, Germany. During the French occupation (1806-1814) this church was confiscated by Napoleon and served as a military depot. The organ was put into storage in 1813. Meanwhile, the church of St. Petri and St. Pauli in Cappel, a village northwest of Hamburg, was destroyed by fire (1810) due to negligence of the organist. The rebuilding of the church exhausted the financial means of the congregation and did not allow for the acquisition of a new organ. An opportunity to buy the organ of St. Johannis/Hamburg for 600 Reichstaler in Louisdor, made possible the installation of this instrument in Cappel in 1816.

The remote location of Cappel and the continuing lack of finances allowed this organ to fall into oblivion and to escape the inappropriate and harmful restorations typical of the 19th century. The fact that Cappel was accessible only by a dirt road during World War I also prevented the confiscation of its front pipes for the war effort. Of all Schnitger's instruments, the organ in Cappel is the only one to retain the original pipes in the front of the organ case. Built for a much larger church, this organ dominates the small village church of Cappel. Until the installment there in 1816 by Johann Georg Wilhelmy, the organ had not been subjected to alterations and, fortunately, there were no changes until 1939, when the concepts of the Orgelbewegung made possible a faithful stylistic restoration.


1680: New organ by Arp Schnitger for the Johannis Kirche in Hamburg. Pipework from a former organ was used and perhaps also parts of the case.
1816: Georg Wilhelmy moved the organ to Cappel.
1939: Restoration by Paul Ott.
1978: Restoration by von Beckerath after damage by a new heating-system. The original frontpipes still are present. They were "forgotten" in 1917. 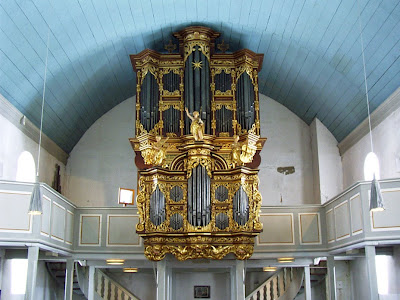 The tonal design contains 30 stops in two manuals and pedal, as follows: 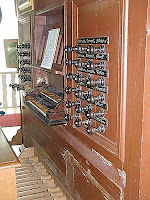 The keyboard gives some information about the remarkable elaboration in the construction of this organ. In contrast to the "reduced octave" which at that time was common in manual keyboards, in which the only genuine sharp in the tenor octave was the key of B, the organ in Cappel possesses two doubled sharps, by means of which the keys F sharp and a sharp can also be played. The reasons for the reduced octave were probably considerations of economy and the moderate requirements of the period prior to Bach. The two additional keys in Cappel represent an important increase to the manual, it is only by Ibis means that the nearly complete performance of Bach's organ works becomes possible. It is easy to see that the unusual fingering involves a great complication for the player.