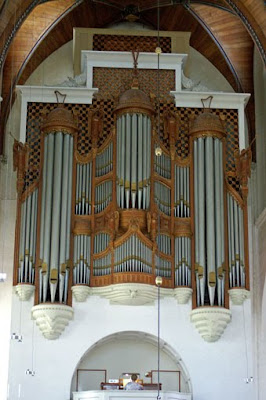 in the Martinikerk Grote Kerk of Doesburg, The Netherlands.


The  organ in the Martinikerk Grote Kerk, Doesburg, Holland is a large electropneumatic E.F. Walcker & Co. instrument of more than 75 stops, originally built for the Nieuwe Zuiderkerk of Rotterdam in 1914. Following the deconsecration of this church, the instrument was moved to the Doesburg Martinikerk Reformed Church in 1970. The sound is exceptional, displaying the imposing power of this organ and its superb acoustic setting.

HISTORY of the Walcker Organ


On July 17, 1914  the firm EF Walcker & Cie. in Ludwigsburg (near Stuttgart) was awarded the contract to build a new organ for the Nieuwe Zuiderkerk at  the West Zeedijk in Rotterdam.

This was made possible through a bequest from Henry Bos Kzn. and from the beginning the aim was to build "a big, in every respect first-class organ."
An investigation of the best organ builders in the Netherlands, Switzerland and Germany, led to the conclusion, to build an electro-pneumatic organ of the latest invention with four manuals and pedal - the 4th keyboard as a 'Fern-( Echo) work "- to be built by the firm of E.F. Walcker & Co., Hoforgelbaumeister at Ludwigsburg, Germany."

With the construction of this instrument they planned to build an organ, "as a model of organ building, also for future generations as a witness of the artistry of our time. "

The concept of the organ sound, designed by Oscar Walcker, was designed from the German romantic tradition, but also shows influences of the Alsatian "Organ Reform ', which none other than Emile Rupp and Albert Schweitzer promoted.

The disposition was prepared in agreement with the donor and the Rotterdam organist J.H. Besselaar. The latter even mentions in the brochure that he wrote about the organ: "There is no cost spared, witness the electric lift to the organ, the organ room with both her artistic furnishings and rich lighting, the applied electric and central heating. For such a magnificent organ it is therefore a suitable environment. "

On March 29, 1916 the instrument (Walcker Opus 1855) was taken into service, and the organ remained in its unaltered state to 1970. In mid 1968 the Nieuwe Zuiderkerk decided to close its doors and find a buyer for the organ. On November 20, 1968 it was publicly sold and went into the hands of the Reformed Congregation at Doesburg. In 1970 the firm Jos Vermeulen at Alkmaar was commissioned to restore and rebuild the organ in the Grote or Martinikerk at Doesburg. On August 31, 1972 the organ with its beautiful "Jugendstil" façade was put back into use.

The original sound concept was retained, although it was not possible to place the Fernwerk in a similar way as it had been in Rotterdam. (The Fernwerk was now placed above the church rafters and used a nearly 21 meter long canal to connect with the church space.) The placement of the Swell also required a different solution, which led to a different visual appearance.

The organ has 4 manuals and pedal and 75 registers and 5415 pipes (which are on 4 floors) and it is the largest electro-pneumatic organ in the Netherlands! A special feature is, that under the metal pipes of the organ there are no specimens of zinc. It is one of the few instruments of the Walcker company from this period, which have been preserved.

Sonate per Organo by Vincenzo Bellini,
performed on the Walcker organ in the Grote Kerk, Doesburg
by Aad van der Hoeven


Improvisation on the Walcker organ at Doesburg, Holland.


Klaas Jan Mulder plays the Intermezzo from the 6th organ-symphony from C.M. Widor on the Walcker-organ at the St. Martini church in Doesburg (Holland) 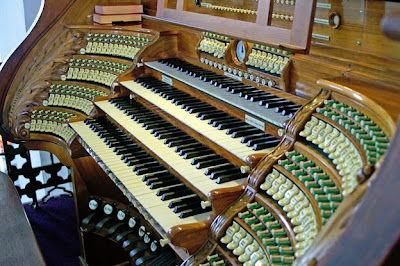 of the Grote or Martinikerk in Doesburg 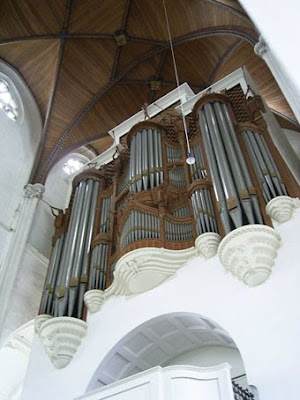