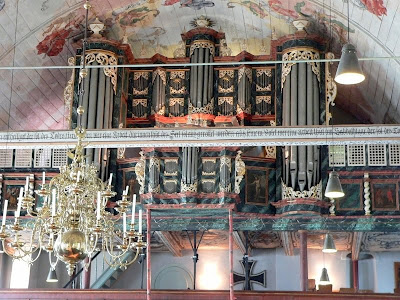 The church was built in 1682 and that year Arp Schnitger began work on the large two manual and pedal organ, installed in 1688.The 1688 Arp Schnitger organ in Neuenfelde (Hamburg) is important, not only because it is his largest 2 manual instrument, but also because it is in Neuenfelde that Schnitger met his first wife, and became, through marriage, a land owner in Neuenfelde, settled on a farm still known as the "organ builder's farm" and built his most important instruments. Arp Schnitger heard this organ every time he attended services in his home church - indeed his chair still exists next to the chancel. The congregation, in appreciation for the elegant organ Schnitger had built for the church, constructed a personal pew (stall) for him. Schnitger died in 1719. He is buried in the church, and his grave has been identified.

The organ was altered slightly during the 19th century, though these changes were reversed in 1926.The organ was "renovated" in the nineteenth century, restored by Paul Ott in 1937 and restored again by Rudolph von Beckerath in 1950. Paul Ott did further work on the instrument in 1953.
However, a full restoration is now necessary.

From October 2000 to June 2007, Karl-Bernhardin Kropf was organist of the lutheran St Pankratius church of Neuenfelde, Hamburg, Germany. The organ there was built by Arp Schnitger in 1683-1688. Schnitger became member of this parish, after he married Gertrud Otte. He lived and worked here from 1705 until his death 1719. The grave of this man, who can be attributed without hesitation to have been the greatest master of organ building in northern Europe, can be found in the church, close to the north entry.
Of his approx. 170 works, only about 30 have survived. The Neuenfelde organ is, with its 34 stops on two manuals and pedal, his largest two manual design. Since the Hamburg-Lübeck Organ Convention of 1925, historic organs have been put into focus again. Neuenfelde, like many other locations in northern Germany, has becoma a place of pilgrimage for organ enthusiasts from all over the world. Since 1952, a regular concert series has been organized, which is now on of the oldest programs of his kind in the Hamburg region.

1750: Jakob Albrecht replaces the Trichter Regal of the Rückpositif for the Krummhorn from of the Oberwerk. In the Oberwerk a new Vox Humana. The temperament of the organ is corrected. ("das ganze Werk in reine Harmonie und Temperatur ... zu korrigieren") according to the contract with Jakob Albrecht

1867: Johann Hinrich Röver replaces the Rückpositif with a Hinterwerk. The windchest and 3 old ranks remained.

1886: Heinrich Röver replaces Mixtur, Cimbel and Vox Humana in Oberwerk and Mixtur and Cornet in the Pedal.

1951: Repairs to the windchests by Rudolf von Beckerath.

1955: New intonation at a lower wind-pressure by Paul Ott. 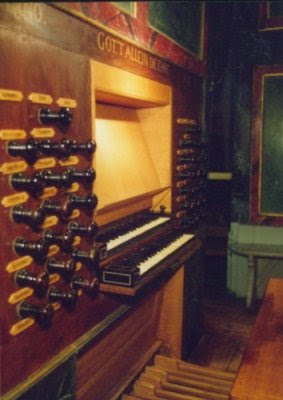 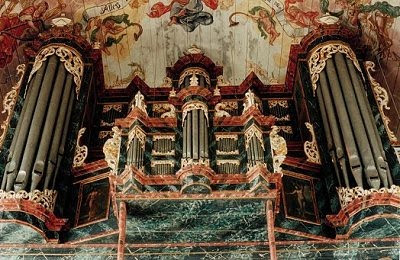