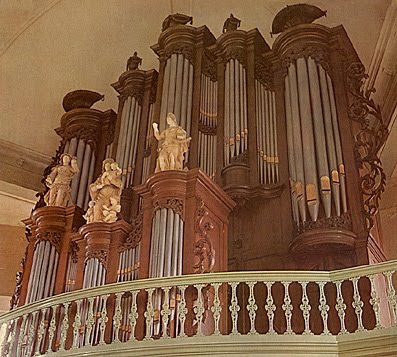 the book "History of Groningen" reported that since about 900 a church existed in Farmsum. This would have been founded by Ludger. In the thirteenth century a limestone building is built, which in later years frequently is embellished. From 1415, this church is a Dekenaat church. Late sixteenth century the church has an organ and a carillon. The carillon is lost in 1580 as a troop Groninger soldiers rob six bells (and ten from Appingedam) to hang them in the Martini. In 1664 an itinerant Jesuit describes the building as a "... great proosdijekerck with a high thoorn ...". The tower also served as a beacon for sailors on the Dollard.

The old organ was renovated in 1696 in by Joachim Kaijser (Jever, Germany) and in 1729 a repair and renewal took place by N A Willenbrock from Alkmaar, who looked after the maintenance to 1732. Thereafter, A A Hinsz, F C Schnitger and the Lohman family worked on the organ. In 1828, the instrument is more or less described: it has 17 voices and 6 ancillary stops including drum & Nightingale. The pipes have a high lead content. It probably has the following disposition:


Ronald IJmker plays the organ of the Reformed Church in Farmsum, Holland

For all the Saints -
R. IJmker


Around the construction of the new organ a strange game was played. Both J W Lohman and Timpe were invited to submit plans, not in itself abnormal. But then they had to judge their "opponent’s" plan and that gave a lot of accusations back and forth. In 1823 Lohman eventually built the organ, but to the specifications of Timpe. The instrument had a Hoofdwerk, Rugwerk, and an aangehangen pedaal. An extension with an independent pedal was provided for. Also on the two manuals was taken into account the addition of another rank. In January 1829, the interior of the church was refurbished with a new pulpit and pews, and in October the organ could be taken into use. In 1849, G W Lohman performed a major overhaul.

In 1856 the tower is demolished and replaced by a new, designed by J. Maris. The medieval church was in poor condition and in 1868 Peter van Oeckelen disassembles the organ due to the demolition of the building. A year later, the new church, designed by C. Wind is completed, and can van Oeckelen begin to place the organ again. The Swell is placed in a strange way: behind the iron fence of the organ balcony. They camouflaged to the extent possible "as an old-fashioned” piece of furniture in a new-fashioned building.


In 1870 the organ is back into service. It now has an independent pedal of eight voices and the Vox Humana has been revoiced. During a restoration in 1953 the company Mense Ruiter replaces the Quint 6 of the pedal by a Ruispijp. The major restoration of the instrument in 1976 shows that Quint is still present with the organ maker and is reinstated.

Also added to the disposition are:

Lohman-Flageolet (1816) that was left after the restoration of the organ of the Martini Church in Groningen was placed on the Rugwerk.

In 1994, Mense Ruiter restored the bellows.

The disposition of this organ is: